It's EverQuest's birthday, and we've got a lot going on that you won't want to miss! 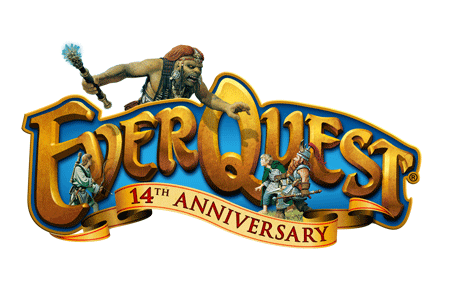 The 14th birthday of EverQuest is almost upon us, and we've got several boatloads of events lined up for you. Starting today, there is so much going on, you'll find different reasons to log in every day!

This year we've added a bunch of new quests to our Anniversary events; these quests have been designed by your fellow players at last year's SOE Live.

With this being the celebration of 14 years of EverQuest, we thought there was no better time to release the highly anticipated Epic Ornamentation Quests! Built as a labor of love by our own Chris "Dzarn" Black, these quests will be available from March 15th onward. Here's a little blurb to get you excited:

Are you tired of your dull and dismal daggers, your boring and bare blades, your humdrum and humiliating hammers? Then come on down to Dzarn's Epic Ornamentation Quest Emporium where we offer the finest in nostalgic ornamentations!

You Shamans longing to wield your Spear of Fate, you got it!

You Warriors wishing you could unleash the glowing blades of strategy and tactics, you got it!

You Necromancers who would rather use your duck staff over the 2.0 you're still holding on to, you got it!

Ever wanted to burn new Freeport to the ground? YOU GOT IT!

Relive epic moments in your class' history as you do battle against Zordakalicus, Innoruuk, Khati Sha, Miragul, and more!

Starting now with EverQuest's 14th anniversary you too will be able to visit Dzarn's Epic Ornamentation Quest Emporium, satisfaction guaranteed*.

*Guarantee of satisfaction not guaranteed. Participants must have completed the original epic 1.0, 1.5, or 2.0 quest that they desire the ornamentation of. Participants will need to visit 16 historic locations and complete a special event at one of them based on their class. These events will be available starting with EverQuest's 14th anniversary, but will not go away when the season is over. Enjoy!

Of course we'll be having a few sales here and there as well, some bigger than others. ;)

So keep your eyes out, your mercenaries close by, and get in game today!