Time to save Velious!

Beta has ended and launch is here! It's time to venture into Velious!

Hail Norrath, well met, well fought, and well won! Beta is over and launch is upon us. For those of you that assisted in beta testing, our deepest thanks. Velious is now open to all and the battles that must be fought are many. The mysteries are deep, and the rewards are great. Will you and your companions save Velious? It is time to find out!

Still haven't made the leap into Velious?

For those of you that didn't get to experience beta with us it's time to take a quick trip through the environs of Velious. 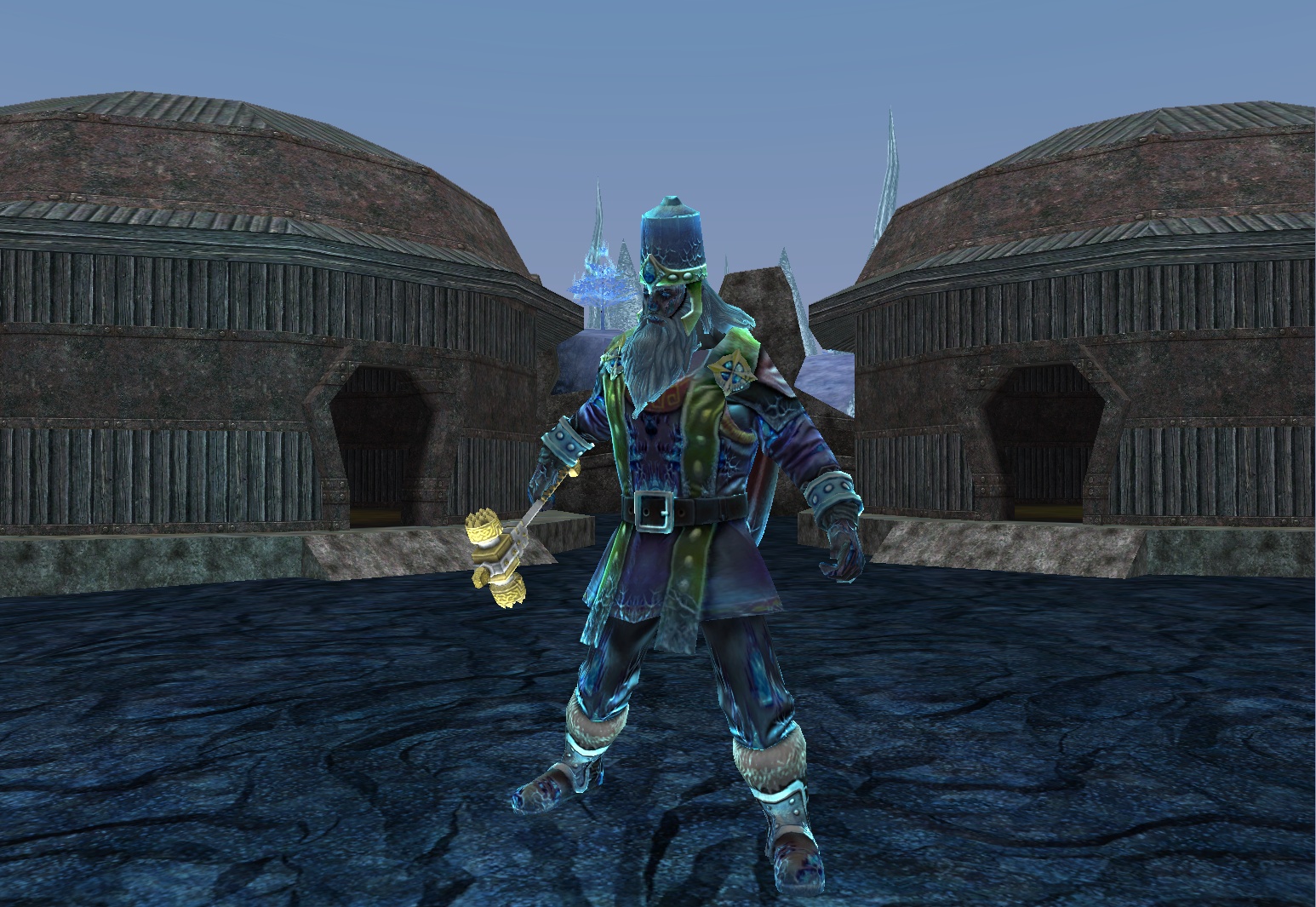 With the Gretespaign completely encased in ice the Eastern Wastes have been almost completely sealed off from the outside world. Ry'Gorr Keep, once the stronghold of the Ry'Gorr clan, has been ruptured by the restless ice of Velious and any orcs that remain there have been dead for a while, though that does not prevent them from being extremely dangerous to the living. Most of the structures, be they coldain, Kromrif, or orcish, have been toppled or completely covered by the ice. It seems that only the great dragon statue that designates the entrance to the Sleeper's Tomb remains unharmed though no one seems to be able to activate the orb that allows entrance.

The survivors have gathered behind a wall, hastily built by the coldain on one of the cliffs overlooking the ocean. Kromrif and Ry'Gorr have given up their age-old hatreds to defend the only safe place remaining to them. The heroes of Norrath have been asked to seek out Belinda in the northern Desert of Ro and hitch a ride on her "tamed" griffins. They can bring them to the assistance of those in need, if they are brave and capable enough. 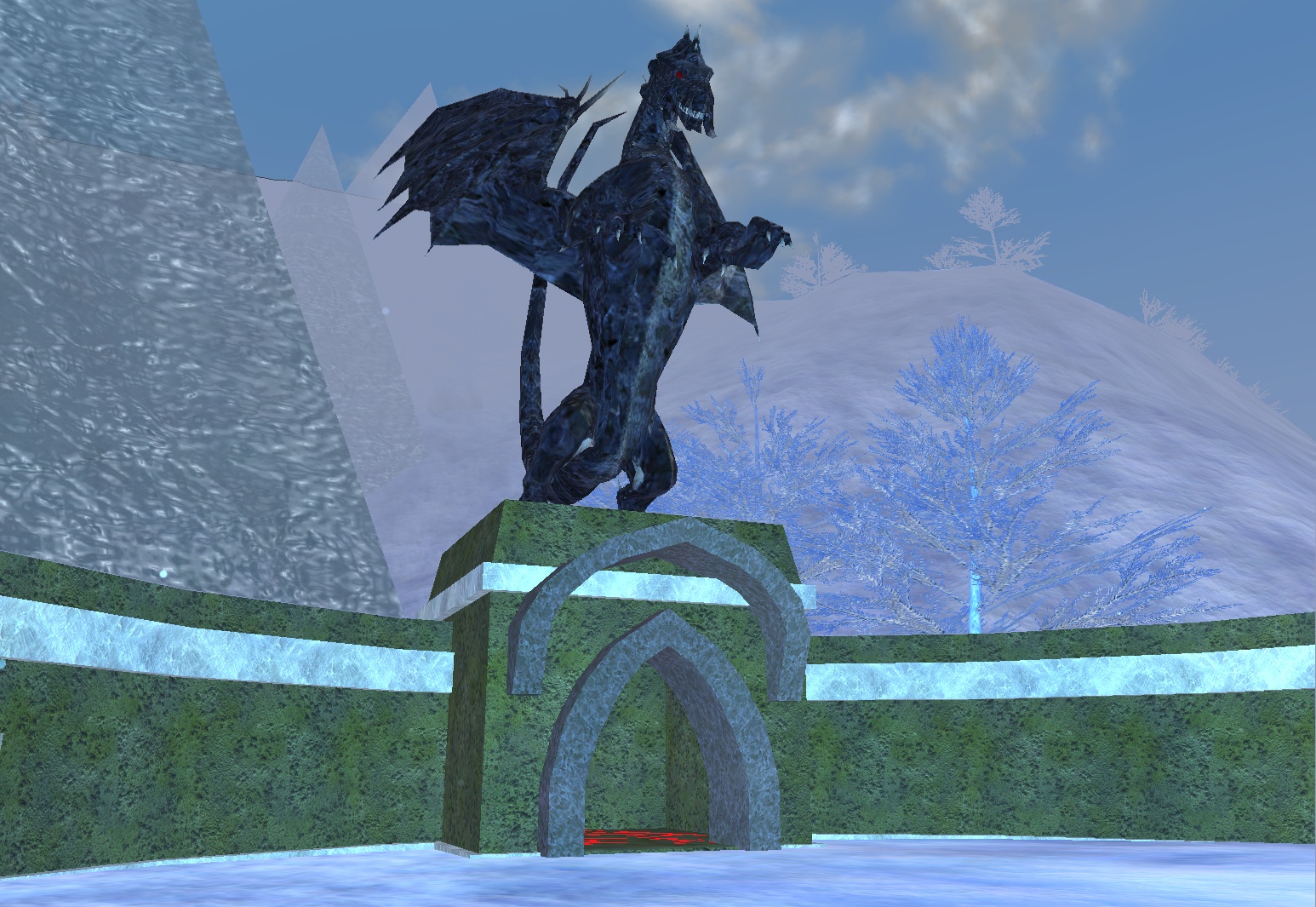 The Great Divide was given that name because it splits Velious north to south. The Daggerflow river splits the Great Divide itself in half, east to west. That river has run for as long as anyone can remember, despite the freezing temperatures that define Velious. Some magic must have kept it free of ice. Today the Daggerflow has frozen solid. This is the most subtle indicator of the changes that have swept over the Great Divide. The labyrinthine tunnels are coated in slowly moving ice. Those that once lived there still wander through its caves, but they no longer live. In the caves where the Daggerflow tunnels into a mountain, the wurms have suffered the same fate. Nothing is safe.

The coldain, seeing the encroaching death brought by the restless ice, have closed off Froststone. Only a few volunteers remain outside to assist any of their people that were trapped when the city was sealed. Their fate is uncertain, but their bravery is unquestioned. 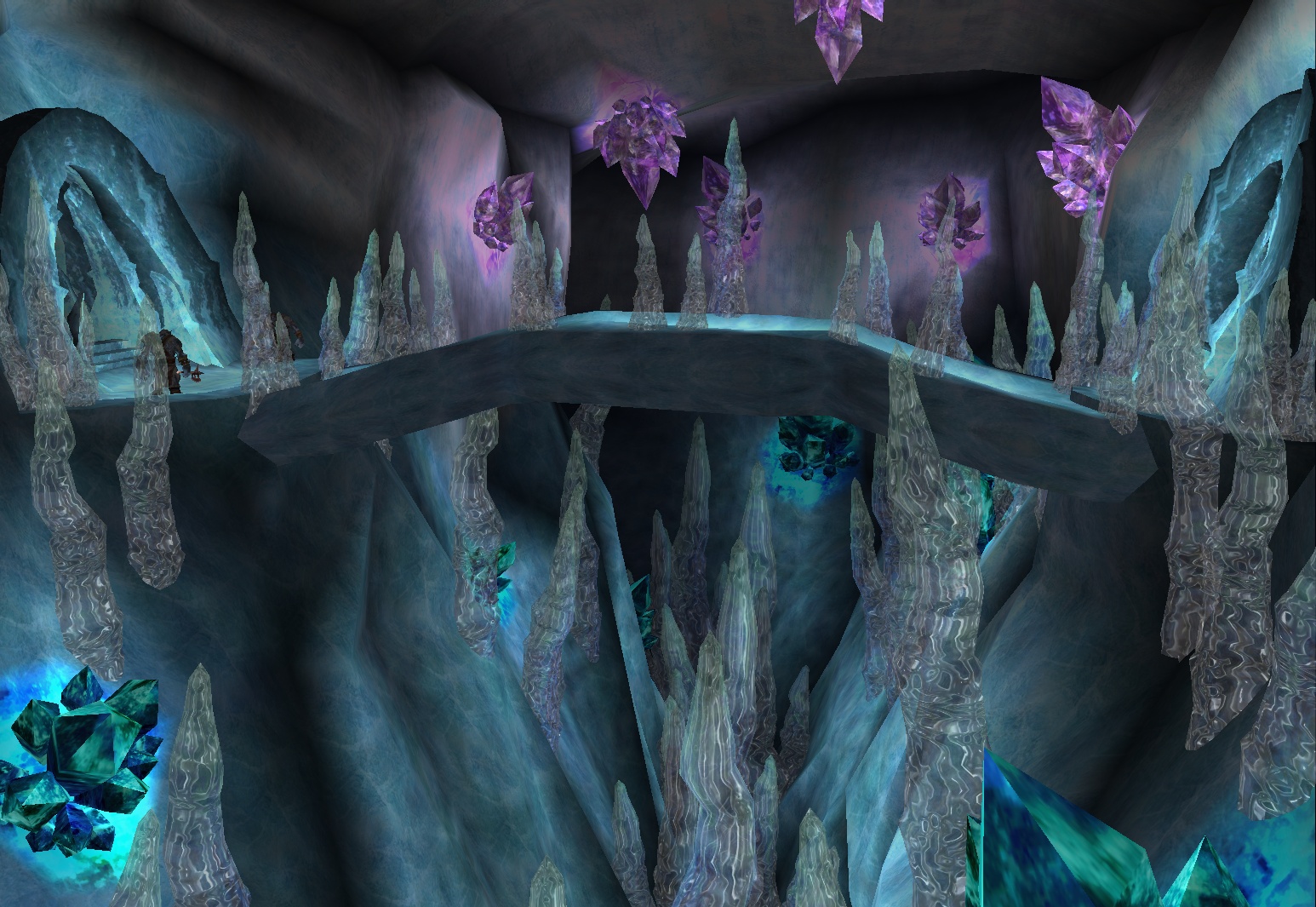 Originally dug by the coldain under the reign of Dain Frostreaver, these caverns have been fought over for generations. The battles continue, but have taken on a darker menace. Spears of restless ice pierce the caverns and tunnels, flowing upwards toward the ceilings. They add a certain beauty to the caverns along with their cruel features and the even more horrifying fate of undeath.

The few living beings remaining in the caverns hide or battle desperately against the restless dead. Expertly wielded picks make reasonable weapons against them, but not even coldain miners can wield those picks forever. And as each one falls another enemy is created. Even the stony tentacle terrors have been taken by the ice. 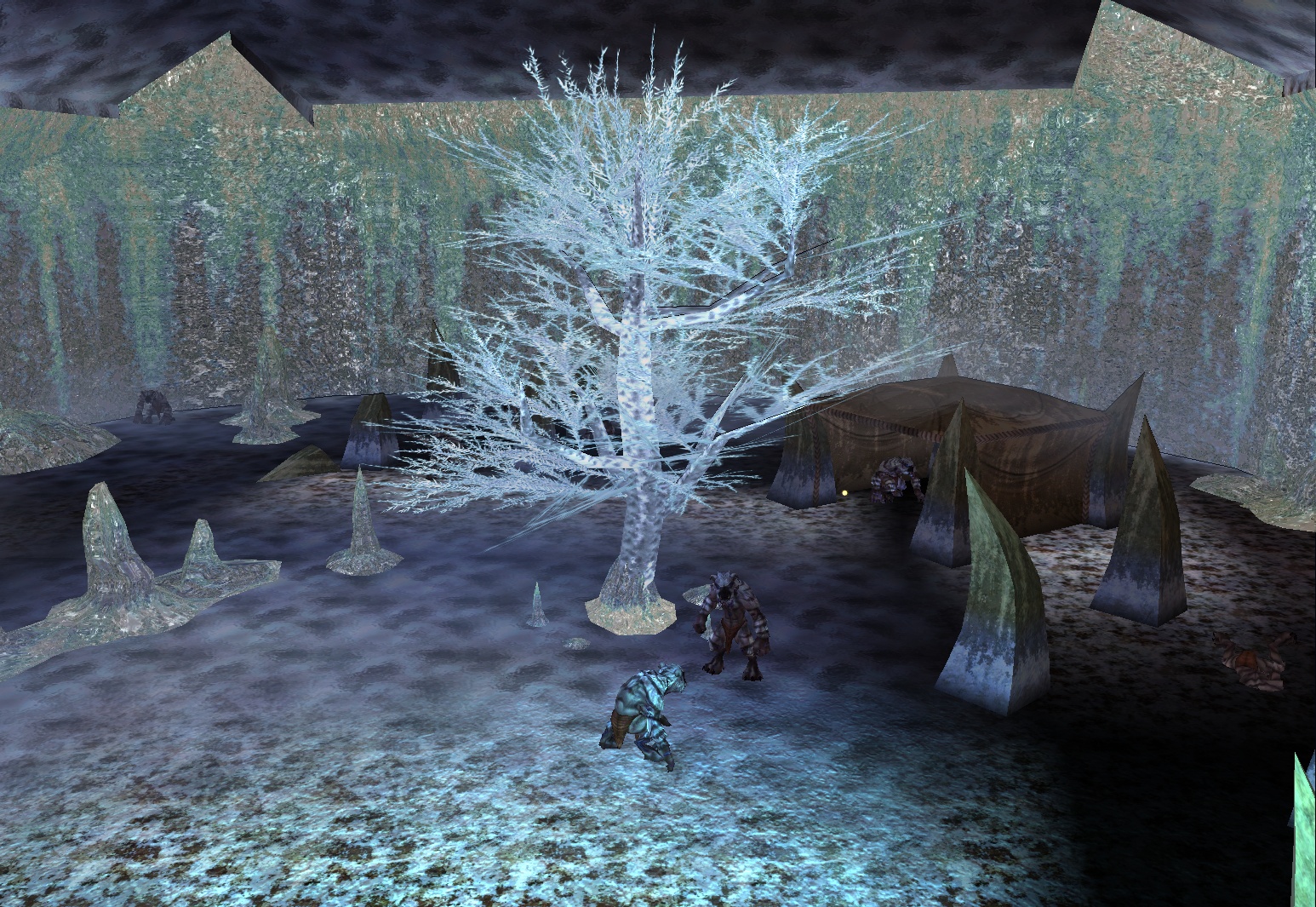 Arguably the greatest living Kromrif sorcerer, Velketor left Kael to build his own stronghold under the snow and stone of Velious. A wonder of ice, his labyrinth is guarded by many forms of terrible monster. And even should a brave adventurer survive to reach the sorcerer's inner fortress, a meeting with Velketor usually meant death.

The coldain suspect that it might be Velketor that is the cause of the turmoil of Velious. Who else but the greatest sorcerer of their greatest foe? Had they the numbers the coldain would siege the place, find the sorcerer, and force him to undo his horrible magic. They seek assistance from the heroes of Norrath to do what they cannot. What will they find in Velketor's Labyrinth? Scouts have seen that the restless ice is prevalent in the areas they have been able to penetrate, further enforcing their belief that the source lies within. 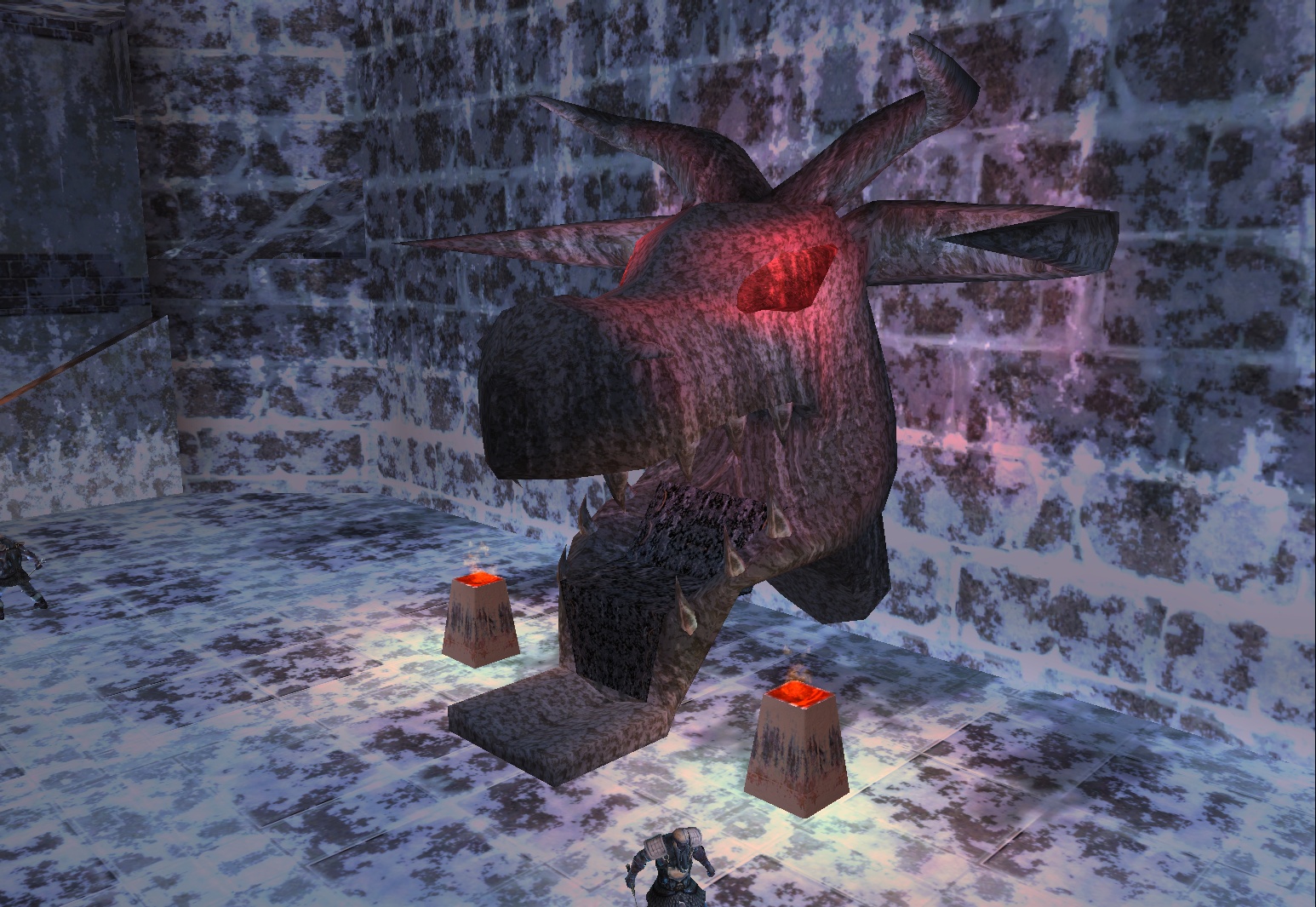 The home of the great storm giants of Velious. An entire city dedicated to the war god. The place where the avatar of Rallos Zek is known to walk. Made from massive blocks carved from the hard stone into which it was built.  It is a majestic city built on a massive scale. One of the most heavily guarded locations on Norrath and home to some of its greatest warriors. But what happens when those warriors become the attackers?

Kromrif and their dire wolves wander the halls, rooms, and arena of Kael Drakkel. Their skin is laced with veins of restless ice, their eyes a frightening bright blue.  Ice flows up the walls and covers nearly every surface, giving the city an eerie, beauty. Unfortunately, the moans on the now dead residents and the howls of their undead pets detracts from that beauty. 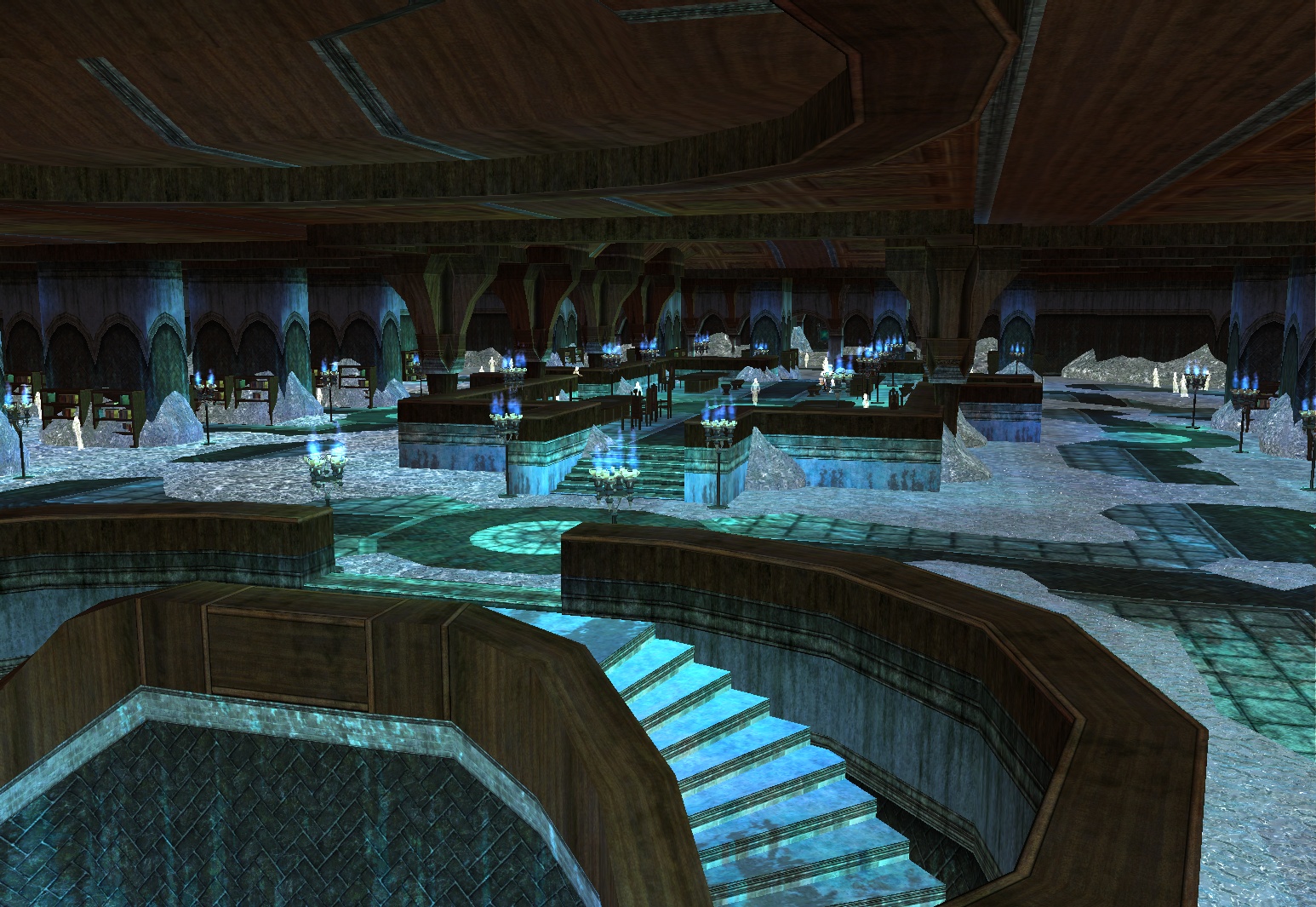 The Tower of Frozen Shadow is a grotesque, yet hauntingly beautiful structure built upon the second of the Icy Fingers in the Iceclad Ocean. It is a marvelous sight to behold. Created from shadow and ice and held together mostly by magic beyond the comprehension of spell casters today. Within are seven known levels. There are rumors of an eighth level, the place where Tserrina Syl'Tor is said to commit the most terrible punishment on those that she feels have disrespected or harmed her.

The coldain are convinced that this is the source of the restless ice. It seems obvious to them. Tserrina is a necromancer of great power who cares little about what harm her magic might cause others. Magical ice that causes the dead to rise seems to be exactly the kind of thing she would and could do. The coldain have constructed a portal that will take a hero into the Tower of Frozen Shadow, should any be brave enough.

We look forward to the tales of your adventures in Velious!