This month's Get to Know a Dev is all about Associate Lead Game Designer Alan "Absor" VanCouvering! I, unlike the designers you've heard from in this series before, was not born or raised in San Diego. I was born in a distant land called Costa Mesa, several days walk to the north of San Diego. Read more!

This month's Get to Know a Dev is all about Associate Lead Game Designer Alan "Absor" VanCouvering!

I, unlike the designers you've heard from in this series before, was not born or raised in San Diego. I was born in a distant land called Costa Mesa, several days walk to the north of San Diego.

I was born before Al Gore invented the Internet. Some say that I grew up during the age of steam, when Charles Babbage built his difference engine. In those days we only had our imaginations to play games with. If we were lucky we had a few scraps of paper, a stubby pencil (with no eraser, of course) and a rock with numbers painted on it in our own blood. In the good ol' days (Editor's note: He's not kidding about the old part), we did games properly!

I am one of those folks that once owned the first D&D books. You know, the little 3 book set that came in a box. I even remember someone in my group having a copy of Chainmail, though I'm not sure we ever actually played. I've been playing RPGs with the same core group since I was seventeen. I have actually heard of some games that we haven't tried, but those games must be terrible or we would play them. I still have an entire bookcase dedicated to RPG game books (with several that don't fit and are sitting on the floor or on top of the bookcase). I still actively play D&D, World of Darkness games, RuneQuest (BEST… LORE… EVAR), Exalted, Call of Cthulhu, and others that I probably don't have time to list, including an RPG that a friend of mine designed based on Magic: The Gathering that has turned out to be a lot of fun.

I had a blast. I still rate Tanarus as one of my best gaming experiences. I had a miserable computer, so I could only play a chameleon, but I convinced a couple of my co-workers to join me and we played the heck out of that game. That was the first time that I understood that you could actually connect with people and share an experience over the Internet, something that would obviously become important in my future working on MMOs.

Oh, and just in case you're reading this, Smed, TANARUS II would be the best thing ever!

During the Tanarus beta I got to meet and chat with the folks at Verant. I made an effort to write useful and detailed bug reports and suggestions. For those of you that want to break into the industry, this sort of stuff is important. If you don't find a way to prove your passion and skill, then you won't be noticed. 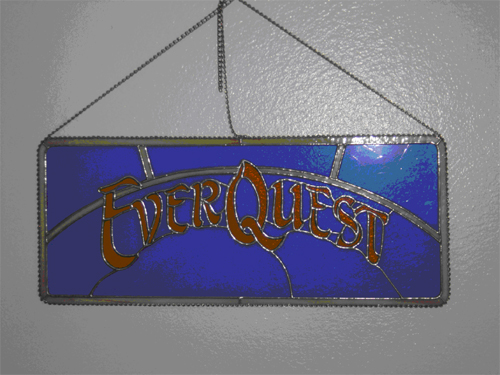 Making this took longer than building the Miragul Raid.

When the beta for EQ started, I was lucky enough to be one of the early testers, though Brad did tell me that there was no way I could play EQ on the same PC I played Tanarus. So, yes, I went out and spent my last few pennies on a top-end PC just to beta test a video game. And, as you might expect, it took over my life for several years.

The co-workers that played Tanarus with me got into the beta, and two of us ended up running a web site (this, like all things with me, is a long story). For the three years before EQ launched I wrote and edited stories about the land of Norrath based solely on the publicly released information about the game. My friend made some hilarious comics and fake ads for Norrathian products. Between this and EQ beta, I literally never had time for anything other than, of course, roleplaying games on the weekend.

One day I got an invitation to come and interview with the folks on the EQ team. I was terrified to meet Brad and the rest of the team. I knew that I had no qualifications to work on the game and I had a stable job working for the U.S. Government. The biggest career decision of my life: keep the stable and boring job that gave me all the free time I needed, or move and take a job in an industry where people often lose their jobs and work crazy hours, but where I could do all the stuff I was doing for fun (building worlds for people to play in) and make money doing it.

That's how I joined the EverQuest Team during the last few months of the Velious design cycle. I was hired as the Community Manager for EverQuest, a job that really had no definition at the time. I had two predecessors who worked hard to find out how to make sense of the task at hand. As I frequently remind the current EQ team, in those days everyone (Editor's Note: Community Managers still do) worked 29 hours a day, 15 days a week. And we loved it. A few of us would frequently go to Denny's at three or four in the morning, then head home and be back in the office around ten the next (well, the same) day.

I was writing manuals, taking screen shots for strategy guides, getting pummeled on the forums, and in the office. I was doing whatever needed doing. Apparently I showed something to someone, because when I hinted that I'd like to try being a game designer, they said yes. I started building content for Gates of Discord, but my first full design cycle for an expansion was Omens of War, and my first real content work was building the Ranger and Druid epic 1.5 and 2.0 quests. That's not like being down the river without a paddle. It's more like being in the deep ocean without a paddle, while inside the stomach of a shark.

I've done a little systems work (tradeskill), but I much prefer designing content. I love to write, as I suppose you can tell by the length of this article, but I've found the single most rewarding part of the job to be creating with a team of people that I like and trust. I am happy to work with a team that is creative, smart, and willing to fight for what they think is right. I've rarely had a better feeling than walking out of a meeting with bruises, bloody knuckles, and a fantastic story, raid event, or expansion outline.

I have to admit that computer gaming is not my passion. It's not my favorite thing to do. Creating is my passion and the thing I enjoy the most. Gaming is my favorite thing to do when my creative needs have been met. I have a collection of hardback books large enough that my friends decline to help me move. I have board games stacked in my office three or four feet high. I have thousands upon thousands of Magic cards. I have hundreds of metal gaming figures. I've made stained glass panels (one even has the EQ logo on it). 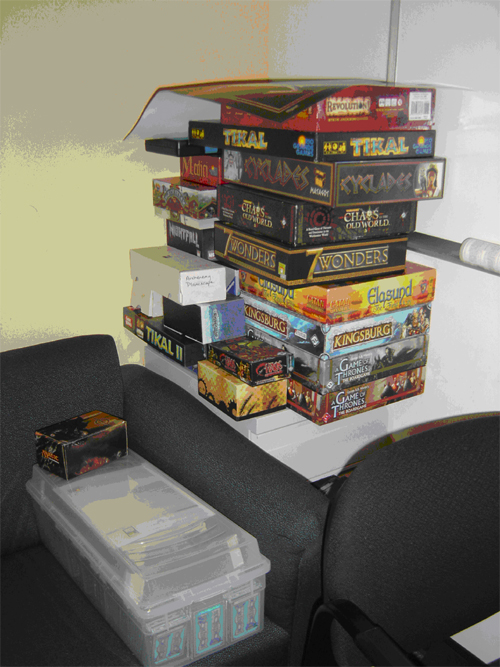 A portion of the games in my office. Not all of them are mine. 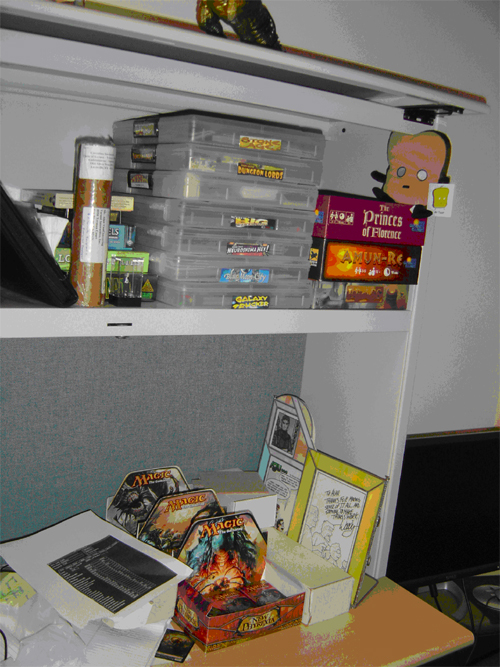 More of the games in my office. Some are missing (Agricola was at Fan Faire with Prathun and didn't get back in time for this picture), so I put Mr. Toast in there to take their place.

So now that you know a bit more about him, let's get started with the questions! Please post your questions for Associate Lead Game Designer Alan "Absor" VanCouvering to the appropriate thread on the forums. Submissions will be open until 11:59 p.m. Pacific on August 21, 2011, at which point we will select the best questions and have Associate Lead Game Designer Alan "Absor" VanCouvering answer them! The results will be posted on the forum and website.