Progression Primer: The Scars of Velious

Take a moment to refresh on The Scars of Velious and all of the content that the expansion brought to Norrath! 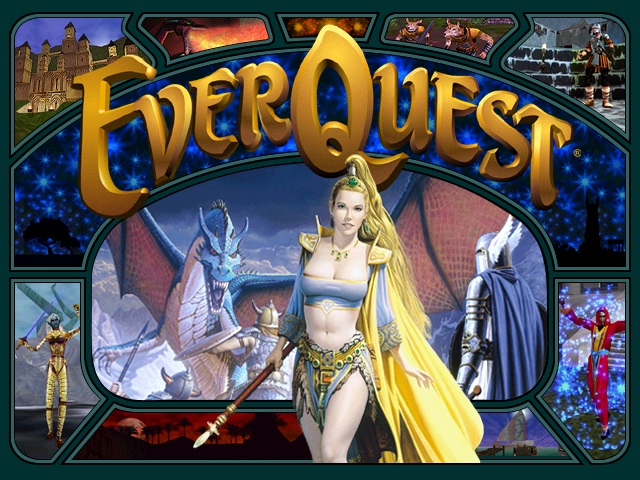 The Scars of Velious expansion is now unlocked on the Agnarr PoP-Locked Progression Server! Before that happens, you can refresh on all of the content that EverQuest’s second expansion brought to Norrath with this progression primer!

The Scars of Velious: The Essentials

The Scars of Velious was the second EverQuest expansion following Ruins of Kunark. It introduced adventurers to the icy new land of Velious, a sizeable continent located in the southernmost part of Norrath. Velious includes a total of 19 zones to venture through, which are inhabited by a variety of dangerous creatures and recommended for exploration only by the most prepared of adventurers.

Velious might be best known for its three warring factions: the Coldain Dwarves, the Frost Giants, and the Claws of Veeshan. These groups have been at war for years, showing no signs of relenting. During your time in Velious, you may side with whichever group you choose, but be careful – this is a significant decision, as the opposing factions will never get along.

When you think you’re ready to venture out into the snow, you’ll want to make sure you’re well enough prepared for the threats you’ll be facing. The land is inundated with powerful monsters, and the war between the factions never ceases. If you find yourself strong enough to survive, there’s a number of sights worth seeing, no matter whose allegiance you’re after.

The Coldain Dwarves reside in the thriving city of Thurgadin, which can be found concealed behind a frigid waterfall in The Great Divide.  Considering its hidden location, it should come as no surprise that the city was built with protection in mind. To enter Thurgadin, you’ll have to cross a massive bridge that spans across an icy (and deadly) chasm. 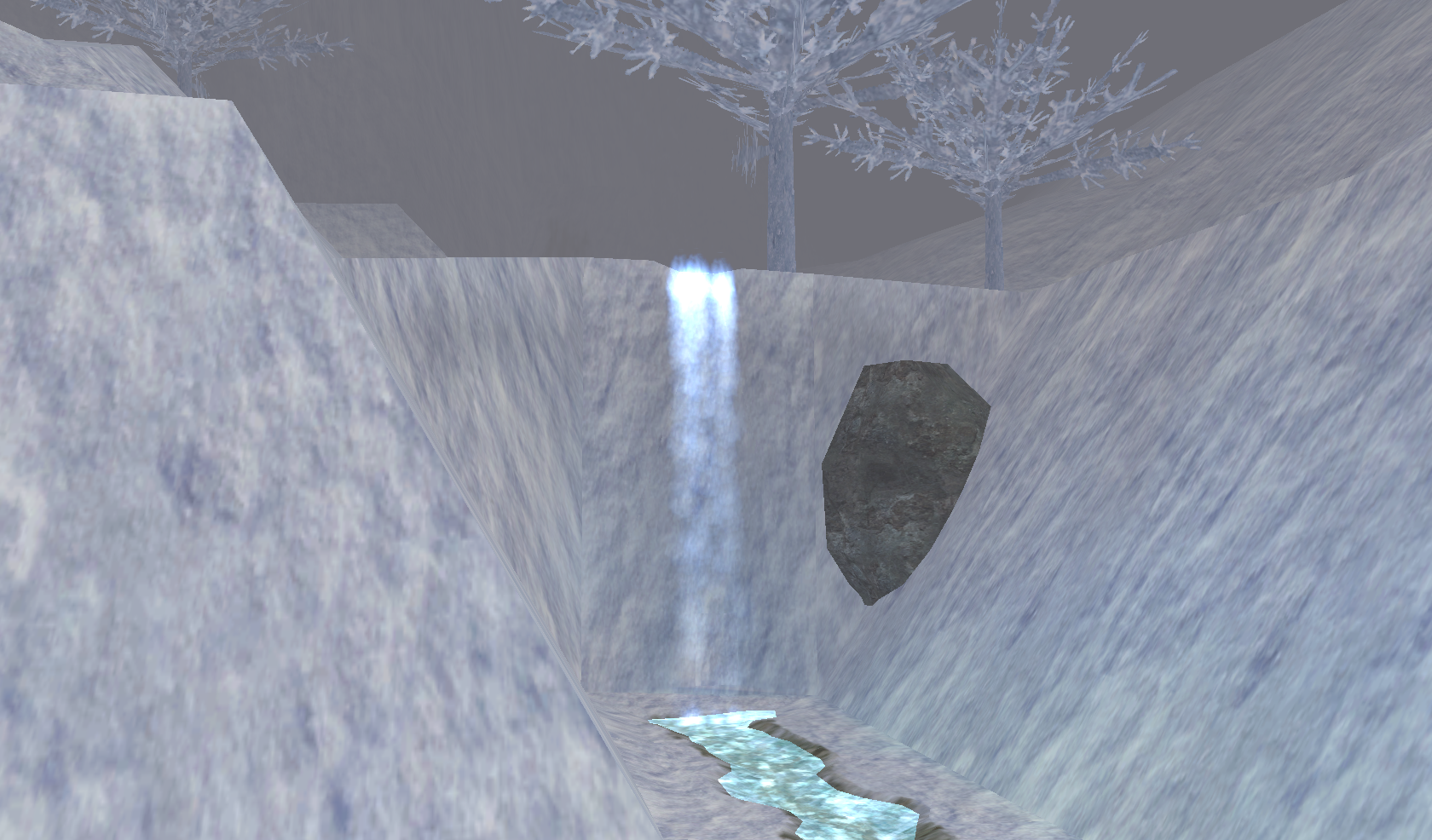 Once you manage to make your way inside, you’ll find a number of shops and taverns to visit, and the Dwarves will tolerate you as long as you haven’t harmed any of their brethren. Make sure to watch your head, though! The city streets were clearly built with only those who are dwarf-sized in mind. 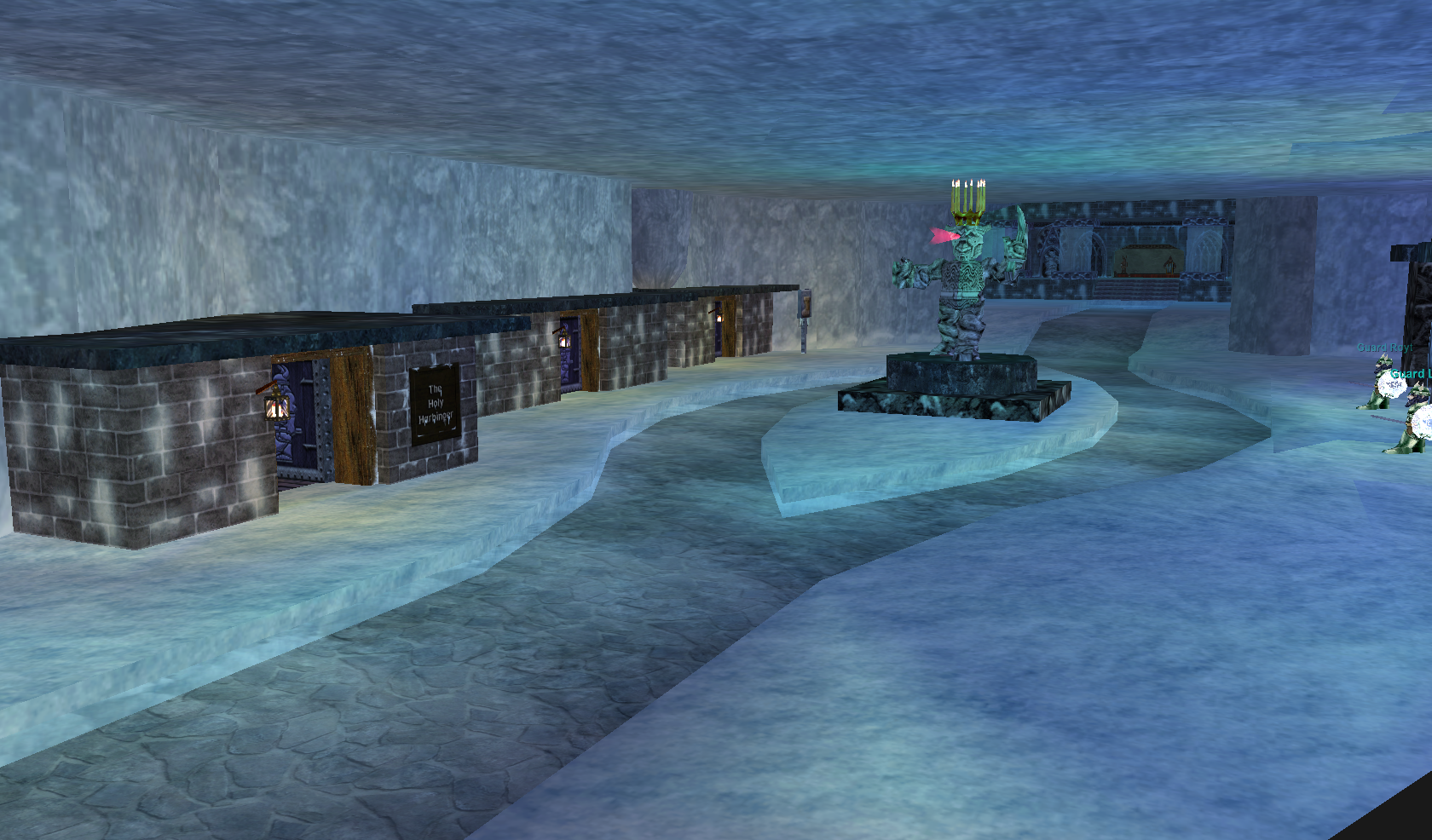 Head deep enough into the city, and you’ll come across Icewell Keep. This impressive underground palace is the residence of Dain Frostreaver IV, the leader of the Coldain Dwarves. If you want to earn the trust of the Dwarves, his highness and his council will enlist you with helping them eradicate the Frost giants from Velious.

If you show up to the palace with less than pure intentions (and get caught), you’ll be cast into the pit in the center of the council’s Great Hall. This pit is inhabited by the most violent creatures in Velious, and exists for the sole purpose of killing off enemies of the Dwarves. It does a fantastic job of fulfilling its purpose – you’ll want to avoid it at all costs. 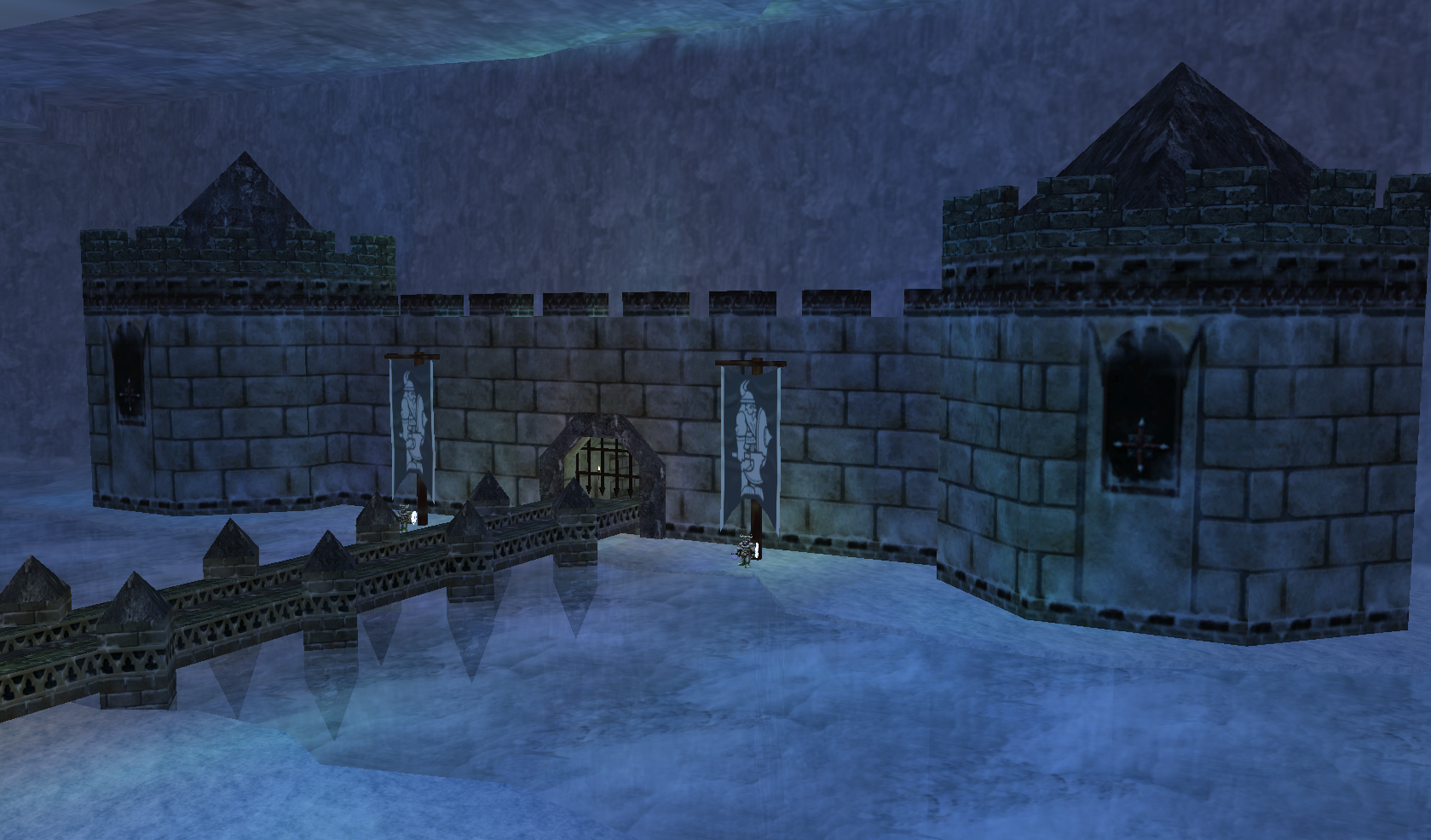 Just beyond the Eastern Wastes is Kael Drakkel, the home of the Frost giants. Though they do not fight amongst each other, giants themselves are split into different factions. The undeveloped Kromrif, who reside closest to the Wastes, wage a primitive war against the Coldain dwarves. The Kromzek live deeper within the city, and instead focus on a constant conflict against the Claws of Veeshan. Any adventurer will want to be careful when entering Kael Drakkel, as the giants don’t tend to take kindly to outsiders. 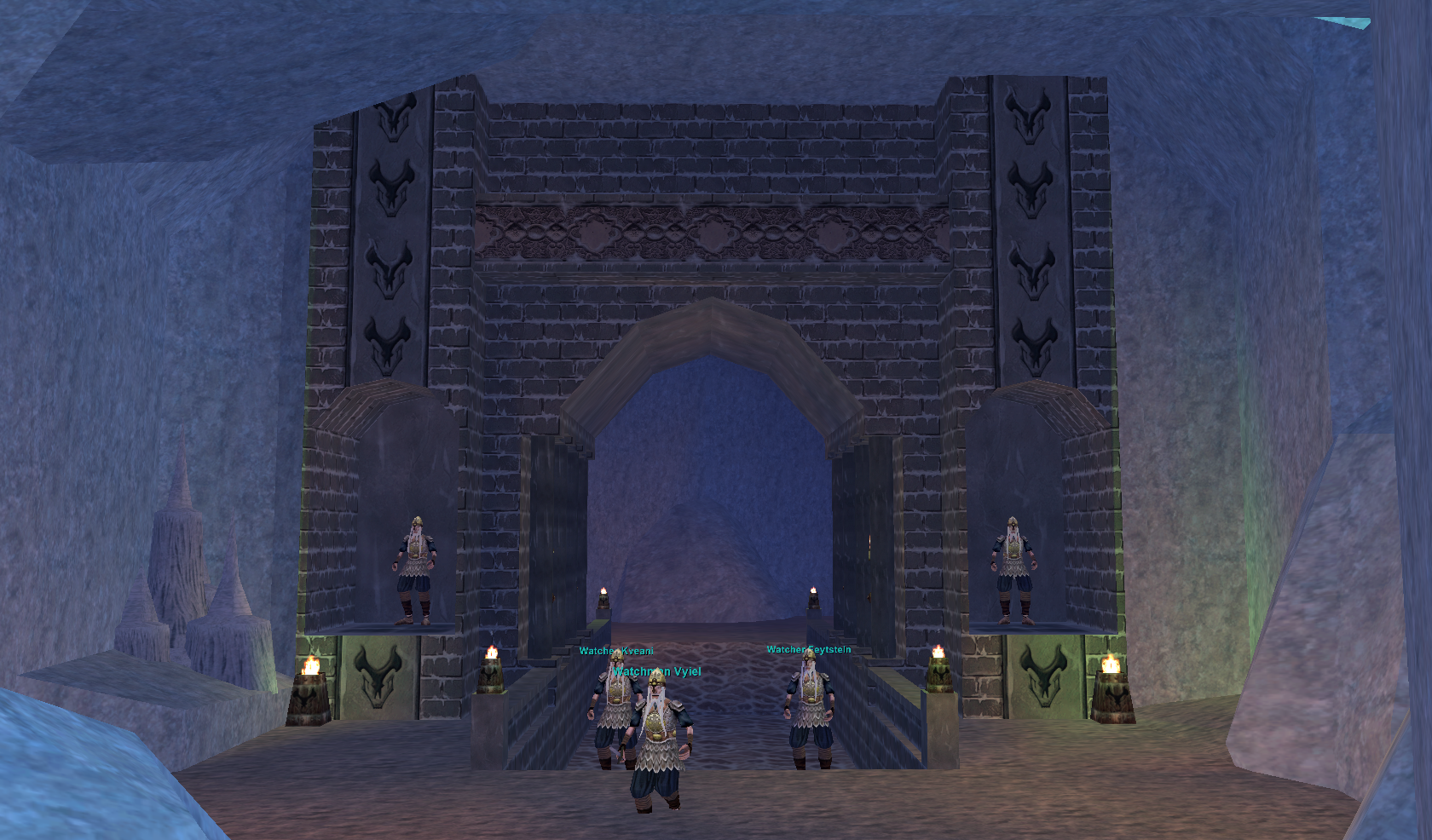 If you for some reason decide to explore the city anyway, you’ll find most of the vendors and storefronts in the heart of the city. Unless you’ve built up a relationship with the giants, you shouldn’t expect them to give you much more than disdained looks. Head south from here, and you’ll find the castle of King Tormax. If you want to work to forge an alliance with the giants, the King and his council will hold the most influence over your relations, but will also be the most difficult to please.

Warnings about the area aside, it’s important to note that making your way through Kael Drakkel is the only way to reach the western portion of Velious. If you make it through the city unscathed, you’ll end up in The Wakening Land, a lush forest teeming with life and the only part of the continent that isn’t covered in snow. 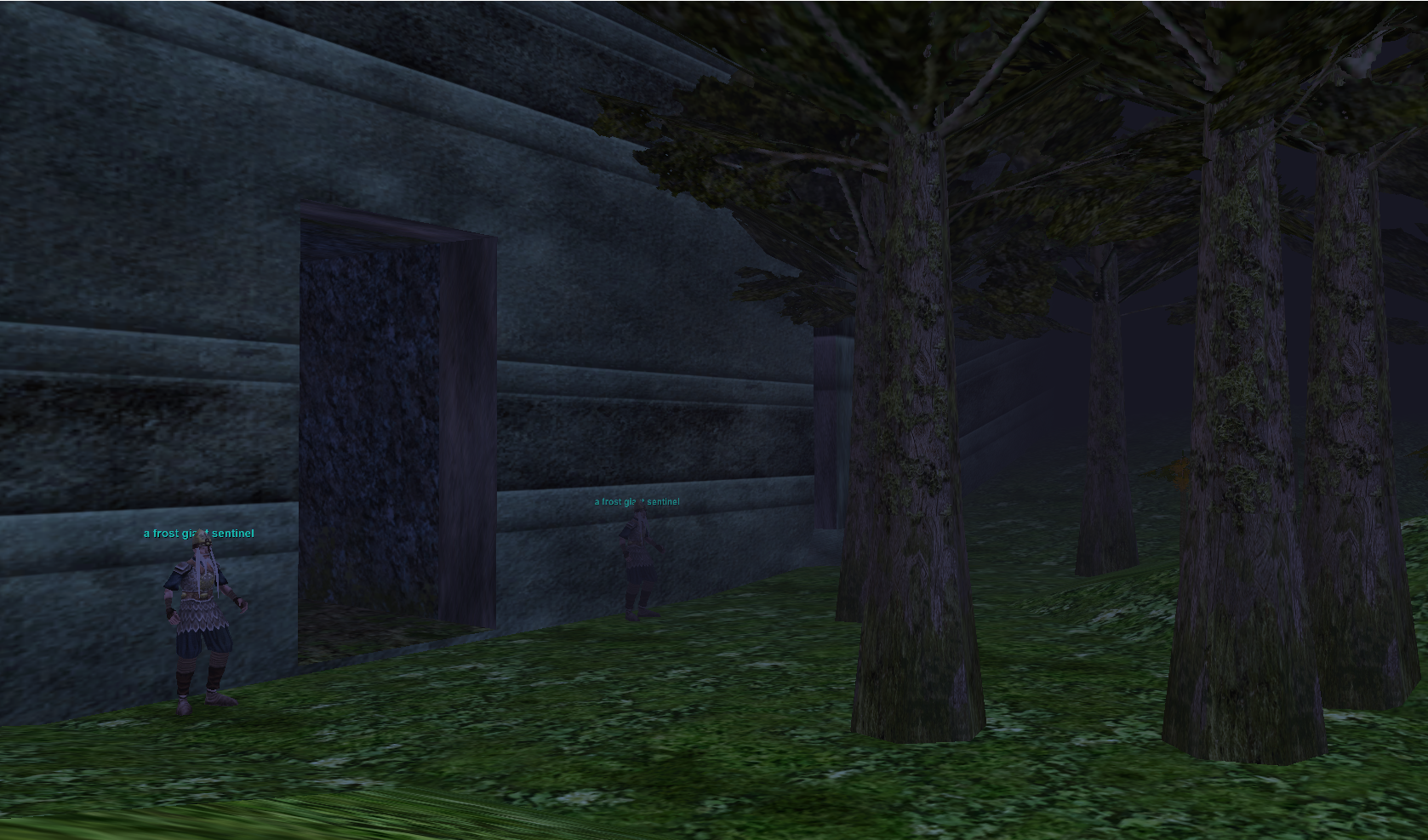 Continuing westward through the forests in the Wakening Land will bring you to the massive tower of Skyshrine, where the Claws of Veeshan have made their dwelling. The innards of the tower are a maze of twisted and tangled caverns and stairways that are difficult to navigate, and even more difficult with the threats that of drakes and wurms that lurk around the corners.

Though the space is laid out in a confusing manner, the tower is still a grand spectacle, full of elaborate decorations and great halls. The lowest levels of the tower contain a number of merchants who work and live among the dragons. Like the Coldain Dwarves, the Claws of Veeshan are willing to tolerate outsiders as long as they haven’t brought any harm to their kin. 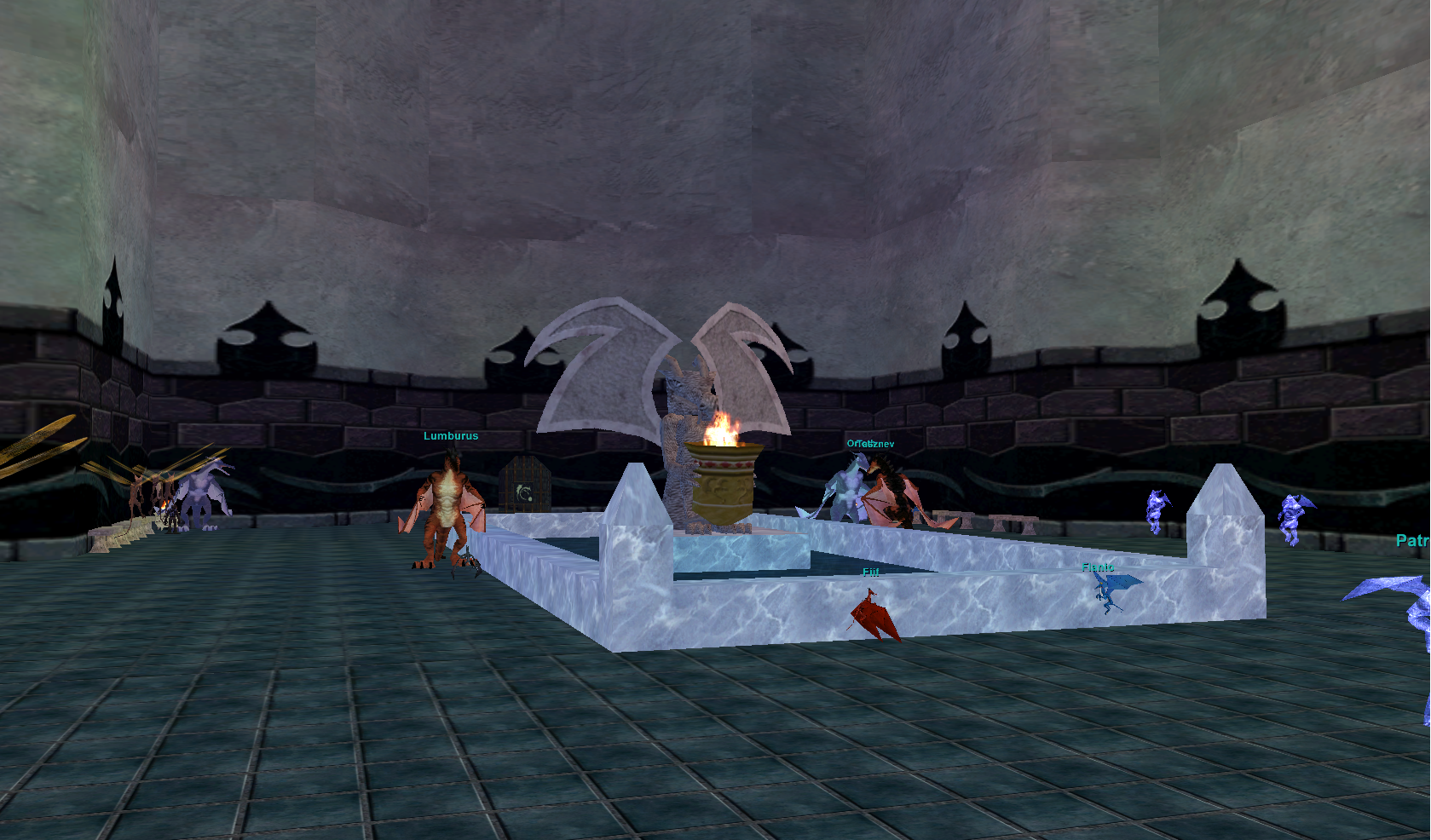 Past the merchants’ district awaits an endless ascent up the countless floors of Skyshrine. If you’re able to find your way, you’ll be met by a number of noble dragons who will gladly grant you with the task of slaying the giants in Kael Drakkel. Reach the top of the tower and you may find yourself in the presence of Lord Yelinak, the sole guardian of Skyshrine. He too desires nothing more than the defeat of the giants, and will handsomely reward those who are willing to aid him. 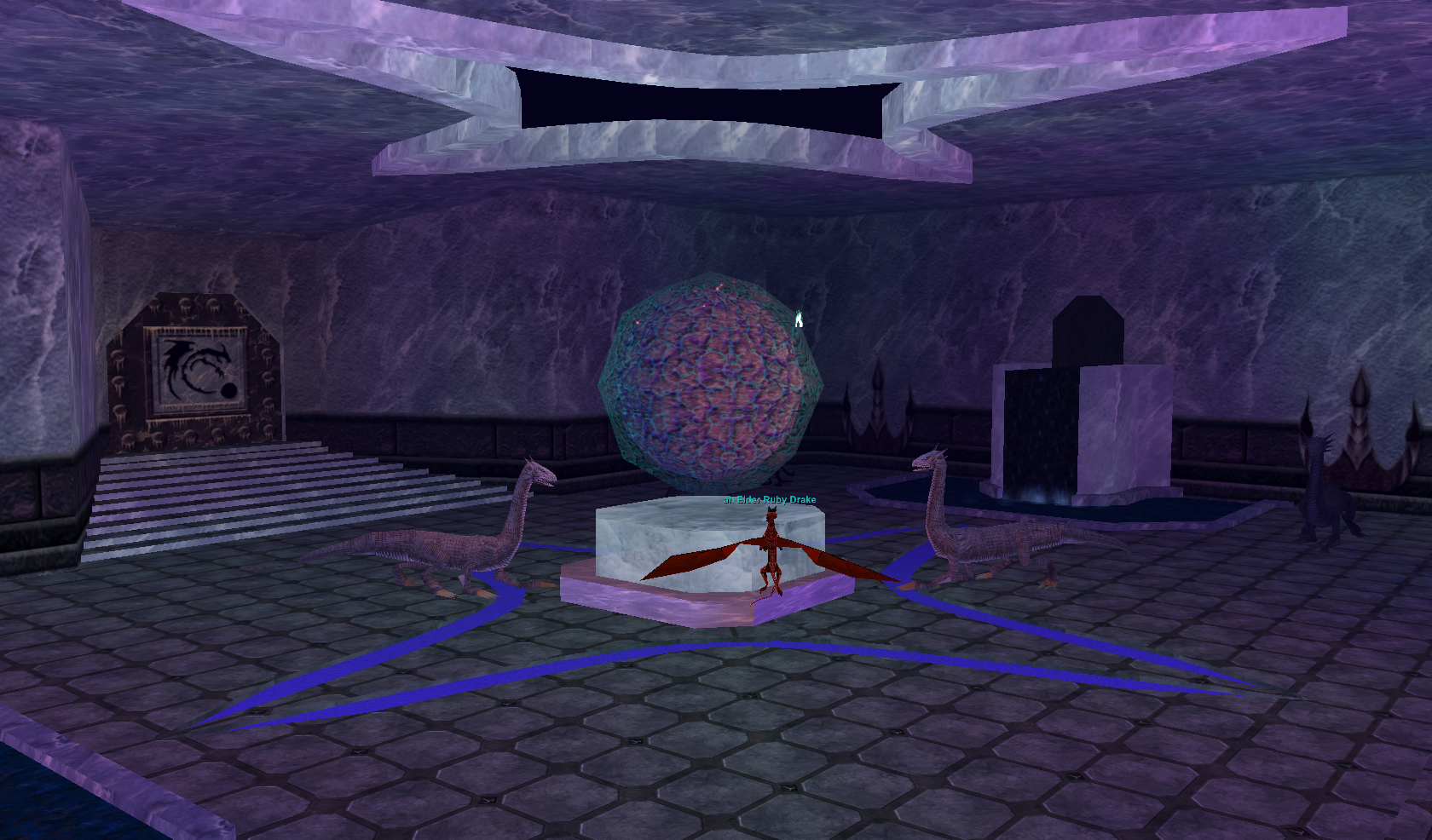 Beyond the towers of Skyshrine, the Western Wastes lie on the edge of Velious. The Claws of Veeshan consider this land to be sacred, and will not take kindly to adventurers who have not proven themselves as allies. The Wastes also give way to a number of other locations that are important to the dragons, so expect to run into wary guards. 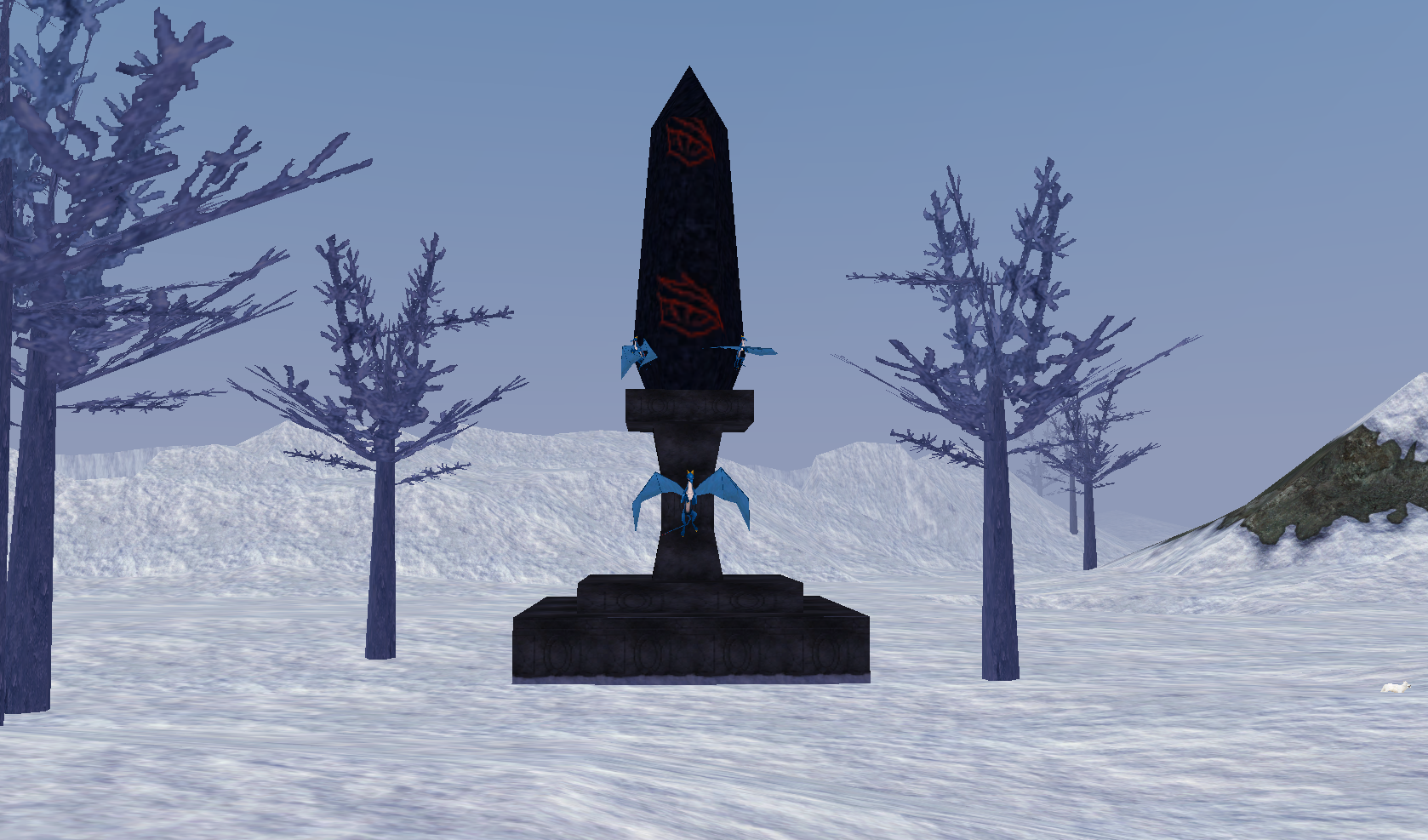 Below the steep cliffs of the northern scar sits the Temple of Veeshan. This breathtaking temple is home to some of the most formidable dragons on the continent, and contains a number of relics that are historically significant to dragonkin. Unsurprisingly, this means that the temple is well-guarded and difficult to freely wander. 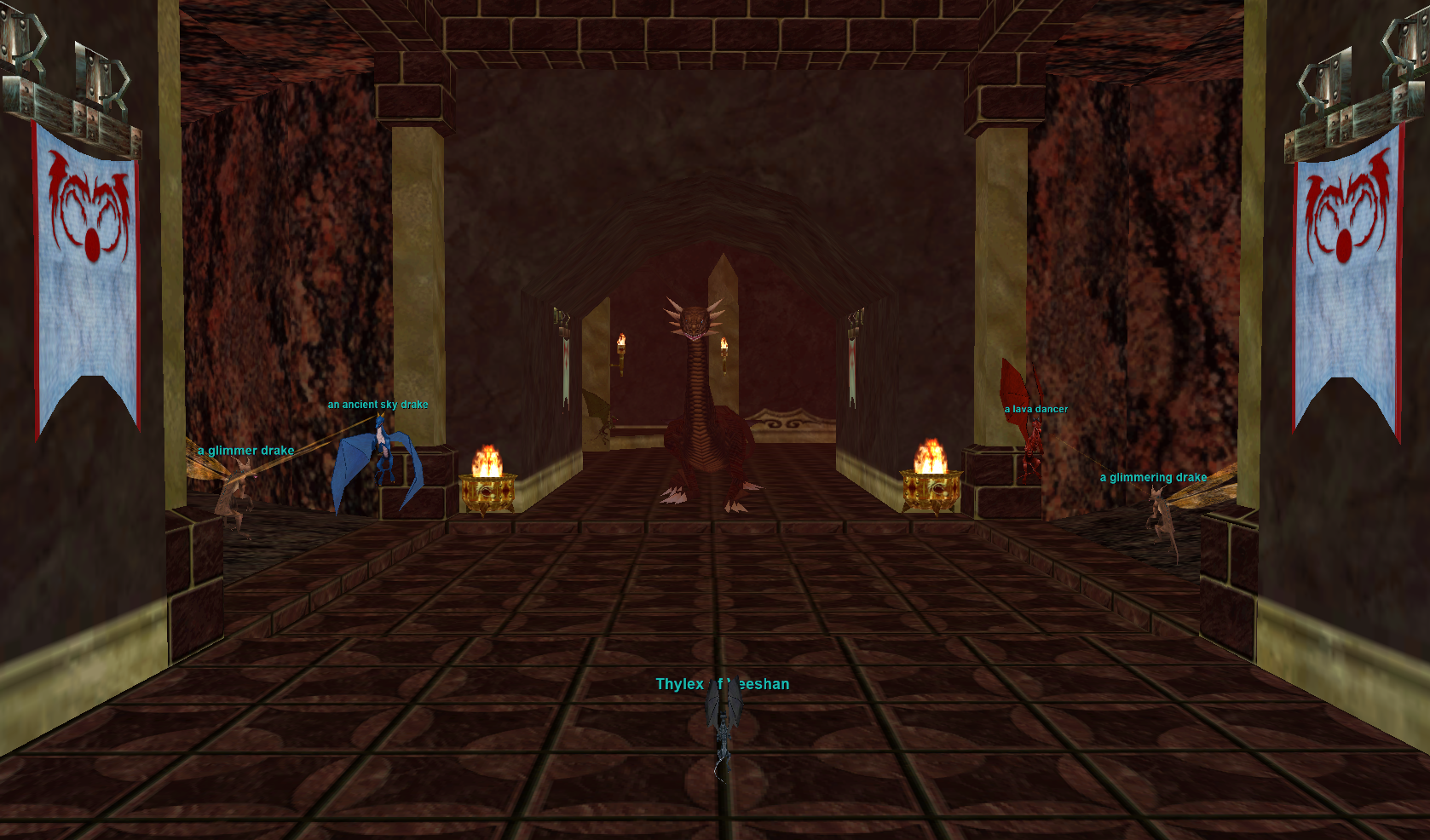 The temple’s entrance in the south wing and the Hall of Relics in the west wing are open to the allies of the Claws of Veeshan, and should be relatively safe. To the east, hall of testing is home to aggressive dragons who must be defeated by those willing to show their devotion to dragonkind.

The north wing of the temple is the largest, and holds the Vault of Worship, which is off-limits to everyone but the dragons themselves. Inside are a number of incredibly powerful dragons who are not particularly fond of intruders. Managing to defeat these dragons can lead adventurers to boundless riches, meaning that sometimes even those who consider themselves to be allies of the Claws of Veeshan can be overwhelmed by their own greed.

Once you’ve made it through the three factions and seen the big cities of Velious, it might be worth backtracking to the Eastern Wastes. In the southern area of the wastes, a giant statue of a sleeping dragon marks the entrance to the underground lair known as the Sleeper’s Tomb.

In this tomb, the most powerful dragon in Norrath is imprisoned. Guarded by powerful wardens, the dragon Kerafrym rests inside in an eternal slumber. If he is somehow awoken, the world of Norrath is bound to change forever. 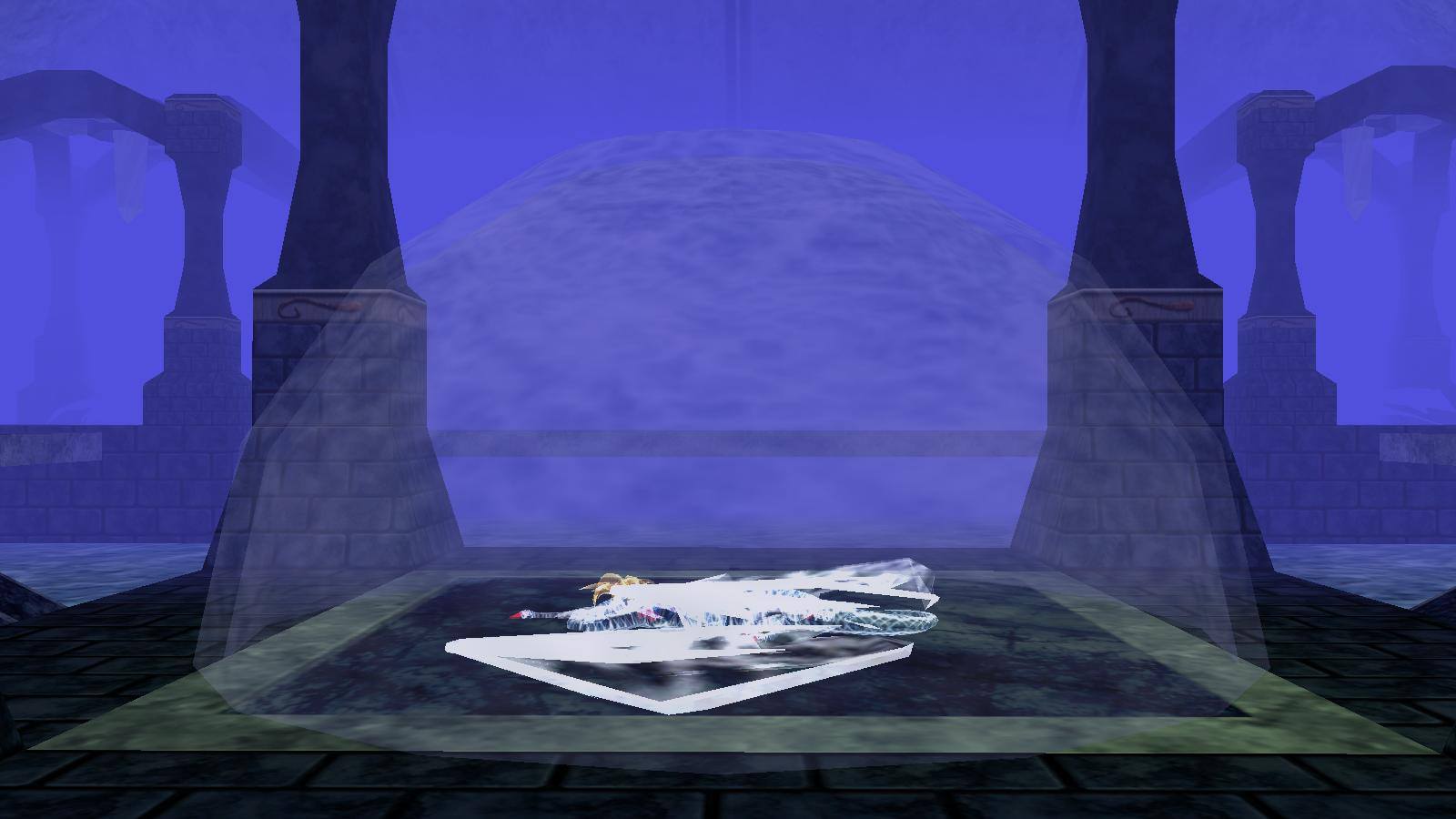 There’s so much more to explore - The Scars of Velious brought a ton of new content and grand adventures to EverQuest. Of course, each member of the EverQuest team has their own opinion on what they think was the best addition! We asked the team the following question, and have listed some of their answers below:

What is the ONE thing that you always make sure to stop by when you’re spending time on Velious?

Niente: I visit the Othmir in Colbat Scar, enjoy the music, catch some fish (and hopefully don’t get eaten by the water dragon).

Mepps: Tower. Of. Frozen. Shadow. I hope people are planning new characters or have alts that are still in that middle level range to play through ToFS. Everything about this dungeon is spot-on classic, from its imposing presence in Iceclad, to the keying process, to the varied and challenging floors and the story they tell. This is an absolute must-see, or must-see-again.

Roxxlyy: I’ve always loved the Sleeper’s Tomb – there’s nothing quite like the feeling you get approaching Kerafyrm and knowing that your actions could potentially change Norrath forever.

Prathun: I always love to revisit the Tower of Frozen Shadow. My guild was the perfect level to explore the Tower when Velious first launched. We spent many nights there figuring out how to get the keys to advance and where the named mobs were. It was a true dungeon crawl experience with puzzles to solve, mazes to navigate, and a dark story to uncover.

Share On:
Previous Article News Archive Next Article
Ragefire AND Lockjaw Have Unlocked Dragons of …
The Scars of Velious Has Unlocked on Coirnav!
Download
Filter By: