Get To Know Your Dev: Episode 5

It's time to sit down with Alan VanCouvering, our Lead Content Designer for EverQuest. But you may know him better as Absor! 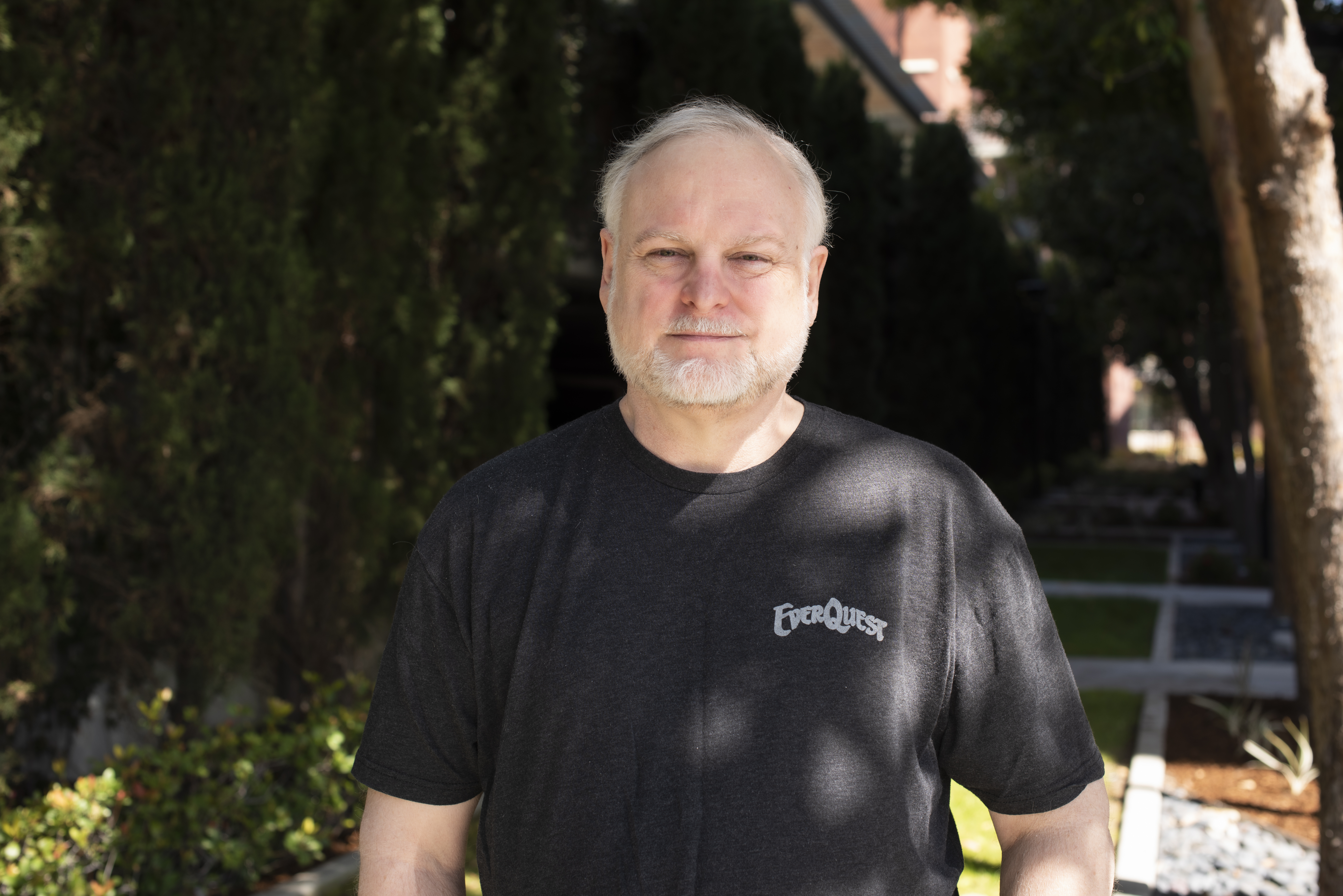 In a time, long, long ago I was a writer for a fan site called EverQuest Express. This was before EverQuest even went into beta. We thought it would be fun to write stories based on screenshots being put out by the dev team. Eventually, it fell to me to run the site. The developers may have been the only people that read our work, but for some reason they did. We started to get exclusive screenshots and some of the developers even wrote some stories for us.

One of those developers was Charles Flock, who managed the beta testing for many of the company's games, including Tanarus. Charles was a great guy, and, for some unknown reason, we got along pretty well. He invited me to join the Tanarus beta. I must have been somewhat helpful because I was invited to the EverQuest beta later. I was one of the lucky few that was in the earliest betas. I remember a letter (or perhaps it was an email, it was more than 20 years ago after all) that I received telling me that my PC wasn't good enough to run the game. So, I had to go shopping for a new one.

Sometime after the game launched, Abashi, the community manager for EverQuest, wanted to go back to being a programmer. The team was looking for someone that could put words in the proper order to form sentences. They knew that I could do that, at least, and so offered me the job.

To be honest, it was a hard decision to leave my government job as a computer specialist (a made-up title if I ever heard one) to join a company running a video game. My boss at the time warned me about how unstable such a job would be and how nearly impossible it was to get fired from a government job. I also knew that I had no real idea what a community manager was or if I could even do the job. It turns out, nobody really knew what a community manager was at the time, so I had that going for me.

I took the leap and here I still am.

I started in October 2000. I got here in time to watch the last few months of Velious development. So, what is that, 20+ years now.

What was the first project you worked on for EQ?

I didn't become a designer until around the time of Gates of Discord development. I helped with the development of Yxxta and did a bit of tradeskill stuff. Sadly, the first zone that I was assigned to be "owner" of was Bloodfields. The original Bloodfields, which nobody has seen because the zone was unusable. It was too large and had to be cut into quarters, but doing so made the zone impossible to navigate, essentially unplayable, and just about impossible to put population in. That version of the zone was dropped and a new one made, but by then I was already working on Yxxta.

What is the favorite project that you've worked on for EQ?

I suppose I've changed my answer to this a dozen times over the hundreds of thousands of times I must have been asked this question. I used to say Dreadspire. I liked working on that zone because I got to work with Prathun on it and between the two of us we managed to do a pretty good job of pulling off our vision for it. There are two faces to the zone, the civilized and the feral underbelly, and making that was a lot of fun.

However, my favorite part of the job is exploring new stories. For example, I really enjoyed writing the lore for a whole new realm of gods for Veil of Alaris and weaving that into the game. Looking back at that, though, I don't really think that adding them was such a great idea. Fun to do, but mostly just an odd little footnote now.

So, the answer today is The Burning Lands. I think this was the first time I felt confident enough to take the story of an entire expansion in an unusual direction by exploring the worlds of the Djinn and their kin. We had talked about doing more Planes of Power content, so I was wandering around those zones when I noticed the lack of female Efreeti. It's unfortunately not uncommon in early EverQuest for the NPC races to only have male versions. But when I noticed that there were no female Efreeti, it started me thinking. Also, why were there only elemental fire and air versions of these beings?

It was fun to latch onto a small inconstancy in the way Efreeti and Djinn were used in the early game and find an entire storyline behind it.

If you want to be a game designer, I'll tell you the things I look for. To work on EverQuest, for example, you really need to know at least the basics of writing code. Some of our best designers, none of whom are me, have CS degrees. Of course, you need to know how to write, specifically how to write creatively. There are some basic errors that we still see today in applications. Tense changes drive me crazy and there is no excuse for spelling or grammatical errors. I know this is a case of "do what I say, not what I do", but I'm just giving advice here. More importantly, I want to see someone exploring the subject they are writing about. I certainly don't want to read another character origin story. I've had enough of those in my first month as the editor for EverQuest Express to last me two or three lifetimes. Don't be afraid to go in a direction that we don't expect. Show us something that we might not have read before that still makes sense in the EverQuest universe.

For example, a lot of folks have written stories or thought up game ideas, but few of them have had to do so in a group setting. There is a unique challenge to creating a thing with other creative people. None in the group are going to have the same idea about what the thing you are making should be. You need to be able to accept the ideas of others and to accept that some of your ideas aren't as great as you think. I believe the phrase is that you must allow some of your precious babies to die when being creative with others.

And don't let any of my skepticism throw you. There is more good than bad when working on games. I find creating stuff with my coworkers to be extremely satisfying. When you find the right job at the right place you will have a sense of fulfillment in your work.

Who or what is your favorite character or item in EverQuest?

What's the most challenging / most rewarding project you've worked on?

We had a game jam here a few years ago. We were asked to build a functioning game, or at least game demo, over a weekend using Unreal. While we didn't get our game into a playable state, we got a lot more done than was expected. The process of creating a game idea, or in that case creatively stealing one, and turning it into a thing you can play is pretty fantastic.

My purely practical answer is that I wish I had coding experience beyond a single class in Fortran (look it up, youngsters).

Less practically, I would have wished I had a little more self-confidence. It is hard to speak up when in a room full of industry veterans and innovators, so I didn't. It took me a while to get over the imposter syndrome enough that I could speak up. At the same time, I'm glad that I still feel a little like an imposter even now, it keeps me on my toes.

Final question, what do you love most about working on EQ?

I love that I get to tell stories to people that they sometimes read.

Thanks for taking the time to answer our questions today Alan!

Share On:
Previous Article News Archive Next Article
Get to know your Dev: Episode 4
Bristlebane Invites YOU to join his new …
Download
Filter By: