Get to Know Your Dev: Episode 6 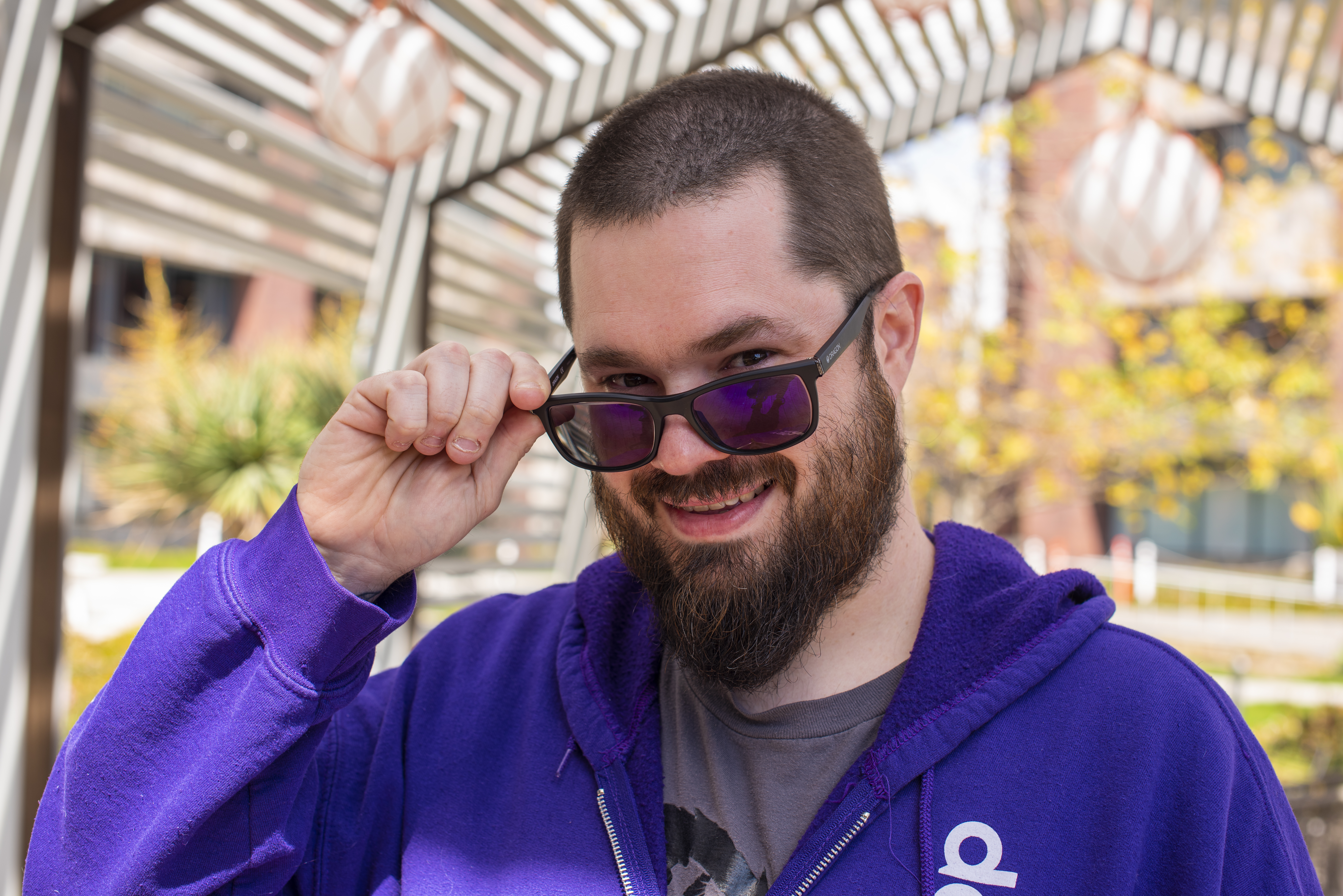 Okay first question - How did you come to work on EverQuest?

After working for years in customer service, I started networking to see about mentoring. I remembered that SOE had an “apprentice” program, and I did everything I could to get on it. They finally gave me a shot, and I was asked to be an associate designer on Just Survive. The plan was after six months, if I worked out, they would hire me on. I got hired in three weeks!  Apparently, I did well and the stars lined up. After some more restructuring, and the sunsetting of JS, I was certain that I wasn’t going to be working much longer. However, Katy Anderson spoke up and vouched for me, got me noticed by the management on EQ at the time, and I was offered a position to be a designer for EQ, fulfilling a dream I’ve had for as long as I could remember. So if I do anything wrong, blame her!

How long have you been working on EverQuest?

I started during The Burning Lands. I didn’t feel like I was an “EQ dev” yet (see: name in credits), so I didn’t introduce myself to the community or tried to make my presence known like I do now.

What was the first project you worked on for EverQuest?

I was given a task to fix a shiny decal in the tutorial zone, the one with the crate. So if you go to the tutorial and see a glowing crate, that was my first “fix”. Otherwise, it was the kill quests for the Trials of Smoke. I had this “clever” idea that since these two factions are basically two of the same thing fighting each other, that it would be “funny” if both kill quest givers said the exact same thing, only slightly changed to pick on the other faction.

What is the favorite project that you’ve worked on for EverQuest?

“You work in a cake factory, what’s your favorite cake?”

“All of them? I’m just happy to be around so much cake!”

Claws of Veeshan had a tumultuous year to be made in. All of the story/kill quests for that expansion was done by me, and it was absolutely a nightmare at the time. However, now I’m charged knowing I was able to do that. Was it good? Gods, I hope so -- you all deserve a good story. Was it bad? I don’t know, but I do know I had fun making them. I also loved placing the collections in Stratos. Another one of my tasks that I just thought, “I wonder how much the players will let me get away with when it comes to trolling them?” You will notice most of the collections in that zone are on the bottom of the floating islands, which means unless you’re clever, you may have to start over from the beginning of the zone as you can easily fall and miss the platforms. However, my favorite project was taking on new designers and showing them the ropes. I absolutely love teaching new people, because I can nerd out about game design all day long, and they cannot tell me to shut up! Joking aside, I consider myself more of a “bard” at work. I won’t be doing any complex programmer work any time soon, but I’m the type of person who likes to lighten the mood.

I don’t know if that’s helping, but if it isn’t, I’m sure someone would have talked to me.

I was 19 years old when I realized that “Working on this game is someone’s career” while talking about EverQuest. I vowed that I would work in games somehow but gave up on that dream several times due to it “not being feasible.” My (then future) wife and I moved down to San Diego after she was offered a position.  She introduced me to a work friend who pointed out, “Sony is right down the road” when I mentioned I was looking for work and wanted to work in games. I walked up to the front door and just...asked security about working there. I was handed a temp agency card and sent on my way. Eight months later, I started at SOE. I first started at SOE as a temp employee for Customer Service. I loved it, because I got to talk to and hangout with all sorts of other video game nerds.

Video games saved my life.  An interactive medium where I can tell a story to people who want to live in said story? Heck, yes, I want in on that! I want to be a part of that so bad it hurts! Every day being able to be a part of this industry is truly a blessing to me, even when it gets really tough at times.

You probably already know more than you think when it comes to games. Play all games, good or bad, specifically bad. Bad games will teach you mistakes others made and how to avoid them. Every game has something you can learn from.  If you can pick that up as you go, then you are ready for a job in games. However, don’t be surprised if you have to rake muck for a while, with the amount of passionate gamers who want to come into this industry.  You will have to work harder to show you aren’t the average gamer. More importantly, “be like water.”. This industry has times when it does nothing, but the moment it does something, that something can be huge!

Finally, never ever ever think, “I just started, my opinion doesn’t matter.” The hardest part to do is to convince me you want to be here. If you are chosen to be here, then already your opinion matters. It was once said to me, “nobody has the monopoly on ideas.” Good or bad ideas are all things we can use to build on each other. Don’t be afraid to blurt out what you may think is a dumb idea, because that MIGHT be the spark someone else (or yourself) needs to make a great idea.

What/who is your favorite item or NPC in EverQuest?

Sailor Twift. I felt that naming an NPC like that was similar to a college dissertation as to why I should be an EQ dev. Emli Widgetton is another one of my favorites. Emli is a personification of my wife. So when she and I are picking on each other I might change Emli’s hair or something just to annoy her. Also, I’m missing my Cloak of Treachery, has anybody seen it lately?

Claws of Veeshan. 2020 was a rough year and we had some departures that made it to where we had to spend the year with our heads down to bring an expansion. It felt grueling, but I know that it may not have been as bad as some of the things the older vets had to go through. I felt like it was my crucible to see if I can keep up. I like to think I did, but honestly, it was one of the most rewarding experiences. It reminded me of working on a kitchen line on a Friday night. For a chunk of time, we gotta put all our petty stuff aside and focus, and we did just that and delivered. I get to look at our players who are partaking in that content and think “I got to be there for them.” That’s cool as hell to me.

Literally. Everyone. Has. Imposter. Syndrome. It wasn’t until I was a dev on JS where Landon Montgomery pointed out that he still gets it from time to time, did I realize that. If an industry vet still feels that way, then it’s the norm, and we all expect it. Your co-workers have your back more than you can fathom, and it’s hard to see when you keep getting bugs for simple spelling errors. However, as Adam can attest, one of my biggest issues is what we call “scope.” I just want to make these huge, grandiose, epic events for everyone to freak out over, so I plan out my quests and try to make it as awesome as I can while challenging myself...only to find out I can’t do any of that. When I first started on JS I was asked to come up with new item descriptions, and I made them all silly and funny, because I’m a silly and fun guy! Well, it turns out that super serious survival stuff doesn’t really want “fart jokes” as a part of it. Again, I needed to learn the scope of the project I’m on.

Finally, you won’t – rather shouldn’t – beat yourself up too much in this industry. Everyone else will do that for you, you just gotta keep a better “you” than “you” yesterday.

EQ, the idea that it’s someone’s job to create this universe, and I desperately wanted to be a part of that. It was when I asked my friend “what do I do if I get stuck” and he said ‘call a GM” and explained that it is someone’s job to help players in a game. It was an epiphany that changed my life. My career will be trying to get people to smile over the internet? Are you kidding me?! That’s a dream come true! That’s true power! I write a word and it incites a feeling? That’s the closest I’ll ever get to casting a charm spell (or berserk if you don’t like my quests).

What do you love the most about working on EverQuest?

Cliched answer but by gods I love our community. Not just with the players, I mean with Darkpaw as well. We have this plethora of video game history right at our fingertips, and I get to ask some of our more veteran devs what it was like to work on EQ when <insert massive insane eq thing here>”. I work with some LEGENDARY devs, and I waste a lot of time in our meetings going full doe-eyed asking things to try and trigger what I like to call “story time”. It massively derails the meeting, but we never walk away without laughing. The history of EQ is filled with such fascinating moments and ideas. I want to know what inspired EVERYTHING and maybe in 20 more years, Alan will tell me!