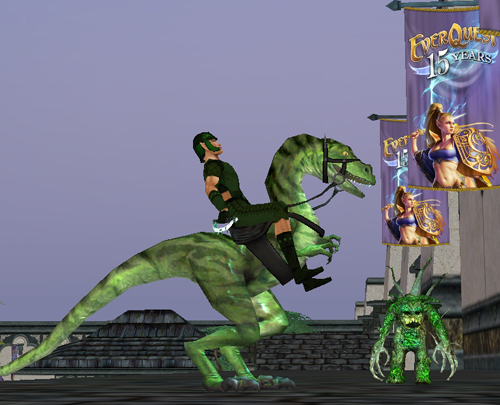 Heroic Characters give players the opportunity to select any class and start out in EverQuest with everything they need to be successful! In response to both former and current player feedback, we wanted to provide an opportunity for players to return to play EverQuest without worrying about an overwhelming level gap. We’ve also been asked for a way to let players try out high-level classes before committing valuable time to leveling one.

Players should find it much easier to begin their adventures in Norrath when they start at level 85 with a full complement of gear, Alternative Advancement Abilities, and a unique mount. Regardless if you’re a veteran player that wants to try a new class, a new player that wants to get caught up to your friends, or a player that hasn’t visited Norrath in a long time, Heroic Characters are a great way for you to get in the game!

And do you want to hear the best part? You can have one for free.

In celebration for the 15th Anniversary of EverQuest, we’re adding two new Race and Class combinations to the game. For the first time ever, players will be able to explore Norrath as a Wood Elf Beastlord or a Froglok Monk. These choices will become available to players when creating characters starting Wednesday, March 12, 2014.

Rolling a new character and getting them caught up to your friends can be a lot of work. If you don’t want to start one of these toons from scratch, you can opt to start one as a Heroic Character.

So what are you waiting for? Pick your class and play for FREE at www.everquest.com

Share On:
Previous Article News Archive Next Article
A Newbie in Norrath: The Return
A Letter to Froglok Monks
Download
Filter By: