Gwelian is wisely seeking out wood elves in the Faydark area to share the blessing of Tunare with.

A terrified cry pierced through Gwelian's dream, ripping her from the calm wilderness of her subconscious. 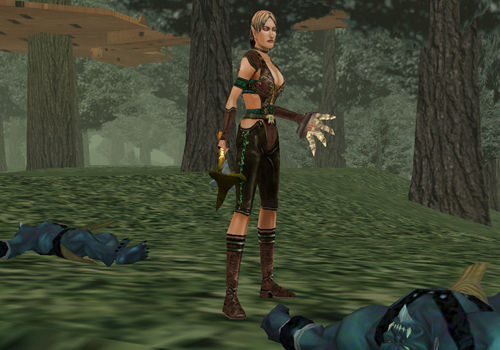 Gwelian instinctively grabbed the thick wooden club from her nightstand and readjusted her leather cuirass, which had twisted in her sleep. She burst through the doorway of her wooden home and emerged into a nightmare.

She immediately saw Amthol, curled up and lying in the massive roots of The Great Oak, an ancient tree at the center of camp that her people had nurtured for countless generations. Her little girl's eyes were clenched tight, her tears splashing onto the oak's sturdy roots. The seven orcs nearby ignored the tiny crier, more interested in hacking at The Great Oak's ancient trunk, for now.

The night watch was dead. It only took a glance to see the town was lost. She counted twelve dead wood elves already, only half of them of fighting age. Three buildings were already on fire, as packs of orcs tore mercilessly at flesh and wood alike.

For a brief moment, Gwelian was terrified. She considered grabbing Amthol and taking her chances in the dark wilderness around them. Kelethin wasn't too far. She looked again at the bodies of her friends and the orcs tearing at the consecrated trunk of The Great Oak.

A soft glimmer of a beautiful woman appeared next to The Great Oak. Even in the chaos, its power could not be mistaken. Gwelian cried out, a desperate plea for aid.

With the confidence of a goddess, Gwelian strode forward, bashing the nearest orc with her club. She ripped the spiked gauntlet off of its arm and pushed it onto her own. Like a dervish, she tore effortlessly through the first pack of orcs that rushed toward her.

The orcs at The Great Oak turned toward the new threat, eager to fight. The shimmering woman reached out and touched its trunk as the orc pack approached Gwelian. Immediately, the ancient tree came to life. Its roots tore themselves from the ground, carefully cradling Amthol on one side and smashing forcefully down on the orc pack with the other.

Gwelian looked to the glimmering woman, but she had gone. She turned to The Great Oak, now a mighty treant, and cracked a smile. Without a word, she bolted towards the next orc pack with her gauntlet and mace ready.

The treant followed her lead, flanking enemies and complementing her assaults as if it could read her mind. They were ruthless in their culling as Gwelian weaved her nature magic with newfound physical prowess alongside nature itself rising up against its aggressors.

The orc tribes near Kelethin still warn each other of that night, when a lone wood elf and her mighty treant defended their peoples—both flora and elf—and repelled an entire orc tribe.

Their massacre was so brutal that the tribes did not dare attack an elf settlement for weeks afterwards. But they will not remain timid for long.

Gwelian is wisely seeking out wood elves in the Faydark area to share the blessing of Tunare with, who will rise up alongside their own treants to prove to the world that nature is protected. That nature defends itself.