Stat Consolidation and You: May 2016 Patch Preview

On (or around) Wednesday, May 18, 2016, we’ll be rolling out our next update. In this update, we’ll be changing what is commonly referred to as “mod2s” on items. We know that changing how item stats display may seem like a big change. This won’t impact you in a negative way, and we wanted to start a conversation about this before it happens so you know what to expect.

In the May update, we’re changing some stats from being separate entries on your character window to being properties of heroic stats. In their current form, the following mods are ones that most characters have easily capped since The Buried Sea (our 2007 expansion):

Having these stats visible on current items serves no real purpose, and ends up adding clutter and complexity to the game that doesn’t need to be there. Our goal with these changes is to reduce clutter on items and on your inspect window, in order to make it easier for you to better understand items at a glance. 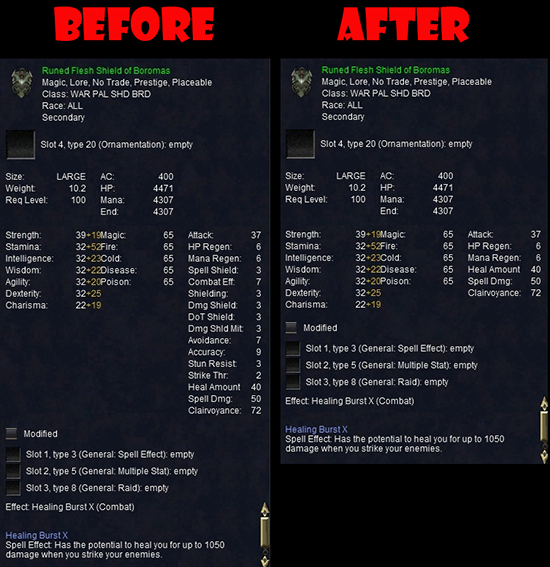 Since these effects will become part of the heroic stats you already have on your armor, we're removing their individual displays from the item inspection window. You will still see how much of each modifier you have on the stats tab of your inventory window, with new tooltips that tell you when you reach the next point.

Here is the before and after of the stat page of an unbuffed warrior with a full set of (un-augmented) gear from The Broken Mirror, to give you a better idea of how these changes will display in game: As you can see, with modern Heroic Stat levels, you will remain at or above the cap in all 10 categories.

For EVEN MORE information this update to item stats, see the post here.

… And That’s Not All In This Patch

The team is working on other improvements for the May update, as well as more updates for later this year. Here’s a preview of some of the things to come.

We're continuing work on consolidating DoT lines. Rangers are definitely scheduled to get updated, and some Shaman DoT lines might make it in as well. Enchanters are probably getting tweaked in terms of the amount of mana that returns to them from the Mind Shatter line. We liked increasing the amount of mana drained as a proportion of damage done, but we believe the efficiency of mana return at this point is too high.

We're continuing our work on the game's underlying systems to improve server stability. The test server should be converting to this new system next week, and when we're completely happy with the results, we'll begin the process of rolling these improvements out to live servers.

All of this is in addition to our normal bug fixes and game tweaks. This patch is scheduled to go out to players on (or around) Wednesday, May 18, and you'll see most of the upcoming fixes when they go to the test server. We have this scheduled to go to test server on Monday, May 9.

While we’re excited for these changes, what do YOU think? Come discuss this update with players on our forums here.